The Dong, sorry frog, with a luminous, err inflatable, nose... and a tree kangaroo too 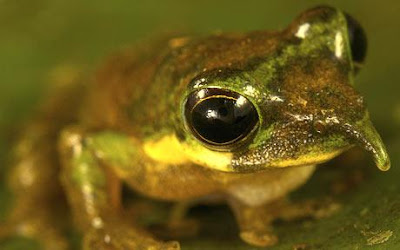 According to the Telegraph an international team of researchers camping in the Foja mountains of Indonesia happened on a frog sitting on a bag of rice in the campsite. On closer inspection it turned out to be a previously unknown type of long-nosed frog. When the frog is calling, its nose points upward, but it deflates when the animal is less active.

The researchers also report finding the smallest kangaroo, a big woolly rat, and a bent-toed gecko with yellow eyes.

The Foja Mountains are in the western side of the island of New Guinea, a part of Indonesia that has been little visited by scientists over the years. So the environmental group Conservation International, began investigating the area. The results of their 2008 expedition were announced on Monday.

Kristofer Helgen, curator of mammals at the Smithsonian's National Museum of Natural History, said one of the most amazing animals the researchers observed was the rare golden-mantled tree kangaroo.

Most people think of kangaroos as creatures that live on the flatlands of Australia, he said, but this one has adapted to forest life. "It can jump into a tree and scurry right up it," Mr Helgen said. "But on the ground it hops around like any kangaroo."

Well there you have it. I will have to see if there is footage of its nose inflated
Posted by jams o donnell at 4:18 pm

Email ThisBlogThis!Share to TwitterShare to FacebookShare to Pinterest
Labels: frog

A long nosed frog probably only lives in an area with no dung beetles.

An acute sense of smell would definitely be a problem!

His nose does make him look a little sad in this picture!

Maybe he just needs a hug to become a Charming Prince...