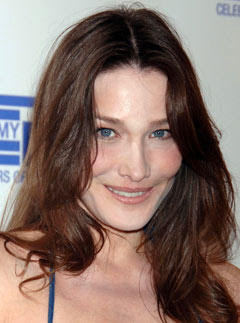 Carla Bruni, the wife of the French president, has been attacked by the Iranian press for was attacked after she signed a petition calling for the release of Sakineh Mohammadi Ashtiani.

An Iranian newspaper, Kayhan, which unsurprisingly is under control of the government, called Mrs Bruni-Sarkozy and also the actres Isabelle Adjani who is campaigning for Ashtina’s release, “prostitutes” in an editorial, while Iranian state television accused the former supermodel of “immorality”.

Hmm and sentencing a person to death by stoning is moral? The Iranian regime certainly has its priorities screwed (statement of the blindingly obvious part 3,779)
Posted by jams o donnell at 12:44 pm

If I were Carla I wouldn't get too worked up over it. To the Iranian regime, about 98% of the world is immoral.

Not from the shitheads who run Iran James

Will the government whose regime sanctions temporary marriages for prostitution step forward.

Err I have no idea!

Carla probably gave a brush-off to that Mahmoud the Mad kneebiter once, and since then he is inflamed against her.

Could be Snoopy! In a straight choice between Mahmoud and Sarkozy, I'd go for Sarkozy too!