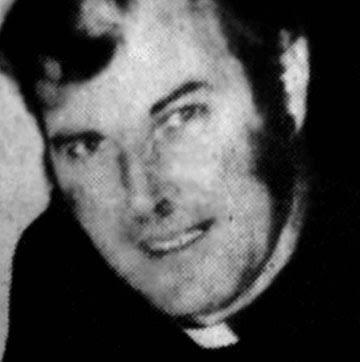 EVIL
There have been plenty of scandals to do with the Catholic Church in recent years, mainly to do with sick scumbags and their predilection for kinds. This case does not relate to paedophilia but is no better.

According to the Irish Times Al Hutchinson, Northern Ireland’s Police Ombudsman, has today published a report concerning the IRA bombing of a village on 31 July 1972 and the involvement of catholic priest James Chesney

Nine people – five Catholics and four Protestants – died and 30 were injured after the no-warning car bombs exploded along the main street of Claudy. Three of the victims were children. No one was ever convicted for the bombings and the IRA did not admit the attack

Mr Hutchinson’s report, released today, endorses an allegation that at the time the RUC had top-grade intelligence that Chesney was a senior figure in the IRA gang that planted three bombs in the Co Derry village on July 31st, 1972.

Chesney was transferred to a parish in Co Donegal following secret talks between the then northern secretary William Whitelaw and the head of the Catholic Church in Ireland, Cardinal William Conway. He was never arrested or interviewed by police about the Claudy bombing or any other IRA activity. He died in 1980 aged 46.

In December 2002, former PSNI assistant chief constable Sam Kinkaid, who reviewed the original RUC investigation, admitted there were serious deficiencies in that investigation and said the RUC were made aware of the talks. Mr Kinkaid apologised to the bereaved for how the police handled the investigation. His claims prompted the long-running investigation by the Police Ombudsman. The thrust of Mr Kinkaid’s allegations are backed up by Mr Hutchinson’s report.

Mr Hutchinson’s officers examined diaries belonging to Dr Conway which confirmed contact with him and Mr Whitelaw over Fr Chesney and correspondence between the RUC, which was led by chief constable Sir Graham Shillington, and the British government.
Mr Hutchinson’s report disclosed:

- Detectives believed Fr Chesney was the IRA’s director of operations in south Derry and was a prime suspect in the Claudy attack and other terrorist incidents.

- A detective’s request to arrest the cleric was refused by an assistant chief constable of RUC Special Branch who instead said “matters are in hand”.

- The same senior officer wrote to the government about what action could be taken to “render harmless a dangerous priest” and asked if the matter could be raised with the Church’s hierarchy.

- In December 1972, Mr Whitelaw met Dr Conway to discuss the issue. According to a Northern Ireland Office official, “the cardinal said he knew the priest was a very bad man and would see what could be done”. The church leader mentioned “the possibility of transferring him to Donegal...”

- In response to this memo, RUC chief constable Sir Graham noted: “I would prefer a transfer to Tipperary.”

- An entry in Dr Conway’s diary on December 5th, 1972 confirmed a meeting with Mr Whitelaw took place and stated there had been “a rather disturbing tete-a-tete at the end about C”.

Mr Hutchinson said there was no evidence that the police had information that could have prevented the attack. However, he said the RUC’s decision to ask the British government to resolve the matter with the Church, and then accept the outcome, was wrong. However, Mr Hutchinson said the decisions made must be considered in the context of the time. “I accept that 1972 was one of the worst years of the Troubles and that the arrest of a priest might well have aggravated the security situation,” he said.

As regards the role of Church and State officials, Mr Hutchinson said his investigation found no evidence of criminal intent on the part of any British government minister or official or any official of the Catholic Church. “The morality or ‘rightness’ of the decision taken by the government and the Catholic Church in agreeing to the RUC request is another matter entirely and requires further public debate,” he said. “Placing this information in the public domain in a transparent manner enables that debate to take place.”

I find it sickening that a piece of human shit like Chesney went unpunished. That said, given the explosive situation in Northern Ireland, perhaps prosecuting this scumbag may have made a bad situation even worse, certainly if Loyalist terrorists had declared open season on all catholic priests. Suffice it to say that the situation in Northern Ireland would have been far worse. Whitelaw was in a position I would not wish on anyone.

But putting Chesney in Donegal? That’s a bit like exiling a Romford criminal to Hornchurch! It is for the likes of Chesney that I hope there is such a thing as Hell. He deserves to spend an eternity in such a place.
Posted by jams o donnell at 2:52 pm

On an equally umforgiving topic:

Did you here the one about the pedophile Irish catholic priest who was grateful for small Murphys ?

He was a sick bastard... but a terrible joke Stu!

Well said Jams. Truly the scum of the earth.