The largest Picasso goes on display 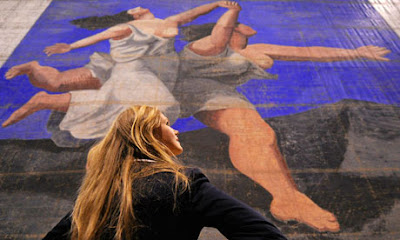 42 years after it was bought for the nation, the largest canvas designed by Pablo Picasso has gone on display at the Victoria & Albert nuseum

The theatrical front cloth measuring 10.4 metres (34ft) by 11.7 metres was carefully installed as part of a show examining the Russian ballet impresario Sergei Diaghilev and the dance company he founded, Ballets Russes.

Dramatic front cloths were used to help quieten the audience at the start of performances. "It was there to establish a mood," said Pritchard. "It was never meant to be seen for very long. The front curtain goes up, an overture is played and you see what is essentially a vast painting. It wowed audiences."

The canvas featuring two without-a-care women racing along a Brittany beach is a copy of Picasso's painting now in the Musée Picasso in Paris, Deux Femmes Courant sur la Plage, executed by a theatrical scene painter.

Pritchard said: "Diaghilev really liked front cloths. He liked the opportunity to get audiences settled for a production. When he saw Picasso's original painting he thought, 'That's just what I need.' "

It was first used during the 1924 Ballets Russes season in Paris, coinciding with the French capital hosting the Olympics that year, and became the opening front cloth for performances of the ballet Le Train Bleu. After two seasons it was folded up and was stored until a Paris exhibition in 1939 and then was unseen again until its auction in 1968 when the ballet critic Richard Buckle bought it for £69,000 and gave it to the nation.

The show, Diaghilev and the Golden Age of the Ballet Russes 1909-1929, will aim to show the company in all its splendid glory and explore his collaborations with everyone from Coco Chanel to Igor Stravinsky, as he determinedly strived to create the best, the most amazing total theatre.

The show opens on 25 September... a date for my diary, methinks
Posted by jams o donnell at 11:32 am

You can tell it's Piccasso. The models look like they've got rigor mortis..!

There's no mistaking his work is there?

You see only a man would paint women with such flying breasts! It's flipping uncomfortable!

Ah but it's art Liz!

Another excuse to go back there.

You're lucky, Jams. I wouldn't miss that exhibition either. Let us know when you go. I hope you're able to take pics.

Ah, you're lucky to be close enough to go for a close-up view.

Thanks. I am fortunate to live where I live. Not sure I will be allowed to take pics, sadly