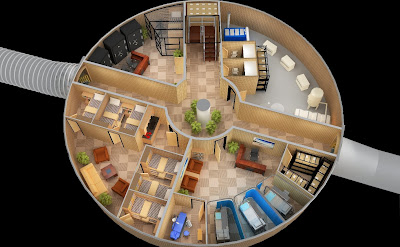 Terrified by tsunamis or terrorism? Petrified by pole shift, pestilence or Planet X? If Anarchy gives you angst then US company Vivos may have the answer!

With a helpful countdown to 21 December 2012 on the site it offers deliverance from disaster… but at a price (naturally!)

According to the Independent Vivos has allegedly built 300,000sq ft of bunker space in the US and claims to have 5,000 Americans on its books. Though Europeans have traditionally been more reluctant to buy into the impending apocalypse, he believes the explosion in London's population of high-net-worth individuals has left the British market ripe for exploitation.

Robert Vicino, the founder of Vivos, which is building a "survival network" of upscale underground bunkers across the United States, will travel to London this week to announce the opening of his firm's first nuclear-bomb-and-asteroid-proof property in Europe.

It is understood that the bumker will be in a former military facility, though its exact location, like all Vivos bunkers, is secret (after all you can’t let the oiks in, can you?)

"People have life insurance. We are selling something better: life assurance," he said. "Our places can survive a 50 megatonne blast 10 miles away; they can be submerged to a depth of 500ft, they can survive shockwaves, and electromagnetic pulses. They have medical facilities, libraries, security offices, gymnasiums, even prisons."

Well it does sound rather better appointed than the former Government bunker at Kelvedon Hatch (now a tourist attraction) but to be honest I am not scared of nuclear war megatsunamis or big asteroids (as if a bunker would be safe from one of those!). If Vivos could vouchsafe against the great mutant star goat that is going to devour us like it devoured the planet Golgafrinchon then I would cheerfully part with my $50k!

In the meantime I will stick to my towel and a book that says “Don’t Panic” in large friendly lettering!
Posted by jams o donnell at 7:46 pm

Email ThisBlogThis!Share to TwitterShare to FacebookShare to Pinterest
Labels: armageddon, bunkers, End of the world

Just what I need!

Ah you are afeared of the mutant space goat to Welshcakes?

Sooner or later, everyone would eventually have to deal with the rubble, which includes the rest of us who can't afford this! ;-)

Ah Ruth, perhaps it;s worth trying for a discount!

That;s true Sphinx, What will be left will not be worth hiding out for.

I'm not sure I would want to survive catastrophic times in the company of people who will want to buy those shelters. Bet you they are boring to death, afraid of everything and hypochondriac. Unless Welshcakes and Ruth get in the same shelter with me. Then I would bring French wine and we could celebrate (or cry) together.

True but dont forget the Icewine. you need something sweet to go with a desert too!

What do you mean by "part ownership". Is it like a time sharing system?

Anyway, it will be interesting to see the IQ distribution of the clients ;-)

In Singapore, all new apartments have their own bomb shelters. Just hope they never have to use them.

Hmm come the apocalypse you get two weeks in the shelter.. Perhaps not! Looking that the site I am sure that most of them have more money than sense

I'd rather go out with a bang than live in a bunker with a bunch of paranoid Americans!

Haha Knatolee! Perhaps a few hens would calm them

No place for the claustrophobic I'd say. I'll take my chances.

Besides, as someone else already pointed out I'd hate to survive a nuclear holocaust only to be bored to death. It'd be like everyone left in the world was my mother -- hypochondria and all.

I can imagine it would be proof positive that Hell truly is other people!