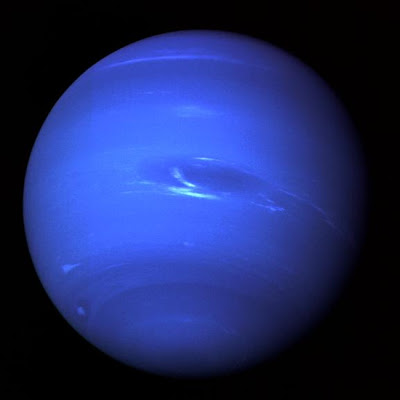 According to Space.com, Neptune will be in opposition today. Big wow, I hear people say but tonight the planet will be returning close to the spot where it was discovered in 1846, marking its first complete trip around the sun since its discovery. It won’t actually complete its first orbit since being discovered yet until next year though

The planet Uranus was discovered more or less by accident in 1781 by Sir William Herschel, in the course of his search for deep sky objects. As time went by, Uranus' position wasn't quite what astronomer's predicted, and mathematical astronomers began to suspect that there was another planet out there whose gravity was influencing Uranus' motion.

In the mid-1840s an Englishman named John Couch Adams and a Frenchman named Urbain Le Verrier independently calculated where this new planet would have to be located to have the observed effect on Uranus, German astronomer Johann Galle actually looked at the predicted location and discovered the tiny blue-green disk of the planet that eventually came to be known as Neptune. The date was Sept. 23, 1846.

Well there you have it..... At least it gives me a less than gratuitous reason for putting up a pic of the planet!
Posted by jams o donnell at 9:39 am

Email ThisBlogThis!Share to TwitterShare to FacebookShare to Pinterest
Labels: Neptune

I'd always wanted to know that. No seriously I did. I love little factoids like that. (You don't want to take me on in Trivial Pursuit... unless the category is old movies... then I'm totally useless.)

So does this auspicious occasion have an official common name? Like... NepDay or something?

Was it called Neptune because of the colour it appeared?

Glad you found it intereswting Mojo!

I suppose it could be. I never thought of it Ruth