What makes the internet utterly worthwhile I 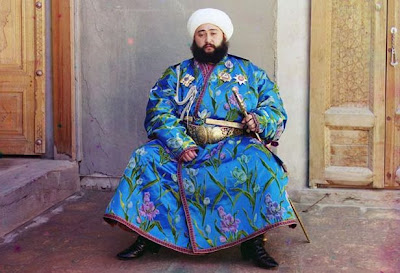 Much as I love the Poor Mouth it does not add much to the world’s knowledge (one or two photos aside perhaps). What really makes it utterly worthwhile is the vast amount of information and art being made available online.

Today’s Independent carried an item about one such collection, the Prokudin-Gorskii Collection which has been made available by the Library of Congress. The above photo is from the collection is of the last Emir of Bukhara

Sergei Mikhailovich Prokudin-Gorsky, was one of the earliest pioneers of colour photography. His collection of stills from Russia – taken between 1909 and 1915 – provide us with an astonishingly saturated window into a past that is usually only ever seen through a black and white prism.

For decades, the photographs remained hidden after they were purchased from his grandchildren by the US in 1948 and then stored in the archives of Washington's Library of Congress. But now, a century after Prokudin-Gorsky toured the length and breadth of the Russian Empire, his 1,900 photographs have been brought back to life and digitised for all to see.

and the incredible amount of detail Prokudin-Gorsky was able to capture," said Helena Zinkham, the acting chief of prints and photographs at the Library of Congress. "He wasn't the only one using this technique at the time but he was one of the few that did it very well."

Prokudin-Gorsky, a Russian noble and chemist who trained in St Petersburg, captured colour by using a camera that recorded three different exposures in succession on the same glass-plate negative. Each exposure, which would usually take anything between three and six seconds, was made with a different coloured filter in front of the lens: red, green and blue.

The triple negatives would then be laid on top of one another and placed in a projector that created a single, full-colour composite.
It is thought that Russia's first published colour portrait, taken by Prokudin-Gorsky

The photos are truly amazing and giving us a window into a world that is gone. It’s not the race haters, the pornographers or the lunatic conspiracy theorists that make the internet worth the effort, it is availability of collections like this.
Posted by jams o donnell at 9:58 pm

Yep, and let's not forget that the contact printing beat any other kind for many years.

Ah now that's something I haven't done in years Snoopy

It is eh? Nursie

I've seen this collection and it is simply staggering. Prokudin-Gorsky didn't invent the technique (that honor belongs to a Scottish physicist named James Clerk Maxwell) but for my money he certainly perfected it.

It's also worth noting that the RGB color model used by today's ultra-modern DSLR's employs much the same method using varying values of red, green and blue to create the colors in modern digital photos.

For all the modernization that's gone into it, photography remains unchanged in many ways even in this age.

Wow it must be great to see in the flech so to speak. These photos are amazing!

What you say about RGB is heartening. Plus ca change eh?

For what it's worth, with all due respect to the Independent, the Library of Congress placed an exhibit of these amazing photos (purchased by LC from the photographer's son in my birth year, 1948) online, not less than 5 years ago, because I remember discovering them at least that far back. The exhibit contained an article on the computer techniques used to compensate for registration problems among the images of the color plates available. You should be able to find the article from one or another of the links from the collection link you provide.