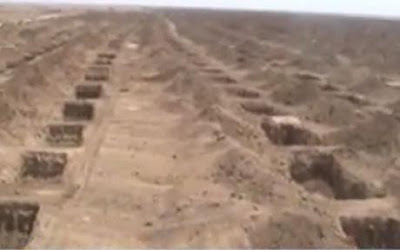 The Telegraph (amongst others) has reported that the Iranian regime has devoted resources to building mass graves for American invaders. The graves are apparently close to the site of war graves for the dead of the long war between Iran and Iraq.

General Moghadam, the former deputy chief of the Revolutionary Guards said "The mass graves that used to be for burying Saddam's soldiers have now been prepared again for US soldiers, and this is the reason for digging this big number of graves,"

Gen Moghadam's claims are thought to be a tangible that Mahmoud Ahmadinejad, who is increasingly reliant on the Revolutionary Guard for political backing, is feeling the heat of international diplomatic pressure over his aggressive posture on Iran's uranium enrichment programme.

Iranian businessmen both inside and outside the country say the economy is suffering, while President Ahmadinejad's many enemies from within the ranks of his own conservative faction in the leadership are frequently outspoken on his domestic record across the board.

There is plenty of other bluster from Moghaddam but it is extremely unlikely that the US, if it were to attack Iranian nuclear sites, would send in land forces to Iran so this is noting ore than a pointless bit of dick swinging by the Iranians.

Even if I long for my friends to be rid of their political and religious masters I still think that an attack on Iran by the US would be an idiotic move.. There is plenty of anger against the regime. An attack might see that evaporate rather than crystallise further.
Posted by jams o donnell at 8:51 pm

Email ThisBlogThis!Share to TwitterShare to FacebookShare to Pinterest
Labels: Iran

I doubt the US will attack Iran. Israel on the other hand...

I hope not SH

"dick swinging by the Iranians". Rather a lot of sweaty work, resulting in a pretty small dick...

And I too hope an attack could be avoided. By any side.