Hitler didn’t have any balls at all? 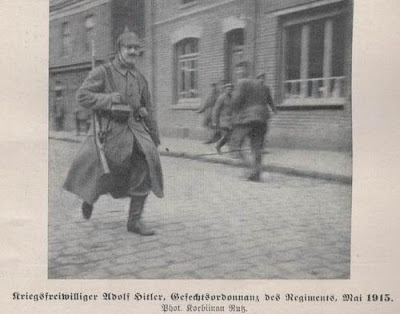 Today’s Grauniad has an interesting on Hitler and his relationship with his army comrades.
Unpublished letters and a diary written by veterans of Hitler's wartime regiment are among newly unearthed documents that challenge previous notions about how the conflict shaped the future dictator's views.

The documents overturn Hitler's subsequent portrayal of his unit, the List regiment, as united in its intolerance and antisemitism, with Hitler "a hero at its heart". They challenge long-held views on Hitler's supposedly brave war record, revealing that frontline soldiers shunned him as a "rear area pig" based several miles from danger. The papers also disclose that List men saw Hitler as an object of ridicule, joking about him starving in a canned food factory, unable to open a tin with a bayonet. He was viewed by his comrades in regimental HQ as a loner, neither popular nor unpopular.

Perhaps no other individual has been more scrutinised than Hitler, but research on the List regiment by Dr Thomas Weber, lecturer in modern history at Aberdeen University, has unearthed new evidence.

Hittler served as a runner but, armed with new evidence, Weber realised that historians had not distinguished between regimental runners, a relatively safe job, and battalion or company runners, who had to brave machine-gun fire between trenches. Hitler was the former, a runner at regimental HQ, several miles from the front, and living in relative comfort.

Speaking of Hitler's famous first-class Iron Cross – the second class was a relatively common award – Weber said that this was often received by those in contact with more senior officers, typically those posted to regimental headquarters, rather than combat soldiers. Drawing on an unpublished diary by a Jewish List soldier, the documents also indicate a lack of widespread, virulent antisemitism.

Hitler's Iron Cross was recommended by Hugo Gutmann, a Jewish List adjutant, but Weber discovered that when Gutmann was incarcerated by the Gestapo in 1937, List veterans enabled him to survive. Gutmann referred to a prison guard who took risks to help him, saying: "As a good Catholic he despised the Nazis." Another List ex-comrade helped Gutmann to escape to America.

Weber also unearthed evidence to show that "the veterans of the List regiment did not – as maintained by all Hitler biographies – unanimously support Hitler after the war. Weber found that few frontline List soldiers became Nazis, whereas several regimental HQ staff became prominent in the party.

Weber concludes that Hitler, who worked for a leftist government after the war, became violently nationalist and antisemitic after Germany's postwar and post-revolutionary economic and political crisis.His research will be published next month in Hitler's First War, by Oxford University Press.

I know that Hitler’s life and times have generated a humungous biographical output but this book sounds like it has found a new and genuinely interesting angle on one of history’s greatest (and well documented) monsters.

As for Hugo Gutmann, that is a story worth a post or two in its own right...
Posted by jams o donnell at 12:23 pm

I'm glad I was able to read this since it's unlikely I would have found the story elsewhere. We own a copy of Leni Riefenstahl's 'Triumph of the Will', a frightening film I believe should be required viewing.

And look around. The little inconspicuous potential "Hitlers" are not so rare. The man himself was perhaps a freak of circumstance but not a freak of nature, I'd suggest. They are always nearby.

Glad you found it interesting Susan. Triumph of the Will is a must see film. Horrifying but essential viewing

To some extent I'm guessing that much of what was written about Hitler during the ascent of the Nazis and through the course of the war was 'shaped to be favorable to his myth'. The old 'history written by the victors' problem. I think humanity so often owes a debt of gratitude to librarians, archivists and curators who quietly go about preserving source documents---because at some point they make it possible for the truth to be told, or at least considered.
Thank you, Jams, for sharing this (and other) historical treasures.