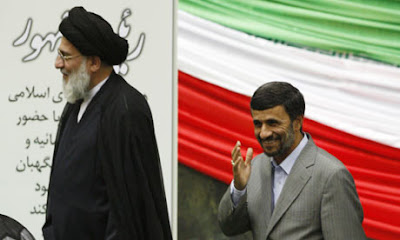 Mahmoud Ahmadinejad has finally been sworn in as “president” of Iran. The ceremony was boycotted by many opposition leaders and politicians, including former presidents Rafsanjani and Khatami (no real surprise there) – a number even walked out when Ahmadinejad started talking. Hundreds of opposition supporters gathered outside parliament faced by several thousand Basij thugs and riot police.

Despite frequent outbursts of Uncle Napoleonism by the Iranian authorities the British ambassador, Simon Gass attended the inauguration. Only France and Sweden also sent ambassadors. The Foreign Office defended the decision to send Gass to the ceremony, saying it was important "to keep channels of communication open" to address issues of concern...However, the UK did join Germany, France and the US in not sending a letter of congratulations to Ahmadinejad.,

In a display of petulance he mocked the Western snub, saying "We heard that some of the western leaders have decided to recognise but not congratulate the new government," Mr Ahmadinejad said in an acceptance speech before the Iranian parliament. "Well, no-one in Iran is waiting for your messages. The Iranian nation neither values your scowls and threats, nor your smiles and greetings."

He trained much of his wrath on opposition supporters saying he would "resist any violation of the law, We will not remain silent," he added. "We will not tolerate disrespect, interference and insults."

Having stolen the election, Ahmadinejad looks weakened and increasingly isolated, facing the wrath of opposition protestors and considerable anger from his core supporters. Luckily for him his job does not have a lot of real power – that still lies with Khameni – so he can rant and spout all he likes. Possibly his biggest problem is the one thing that underpins the Iranian economy, OIL. The economy is not in a good way at the moment. If prices fall, then he could be royally screwed.

Ahmadinejad isn’t down yet and the theocratic rulers of Iran are not going to be swept aside tomorrow but I wonder if, in moments of lucidity, he is beginning to regret having the election rigged.....
Posted by jams o donnell at 7:31 pm

The Iran solidarity movement in the US is a fragile coalition, including the socialist left to neoliberal elements. It is too bad they are too disorganized to respond to an event like this.

What we can do from the West is limited. I do think that any one from the socialist left to neoliberal should be giving teh protestors unequivocal support... the likes of WSWS have shown their true colours and proved themselves an irrelevance!