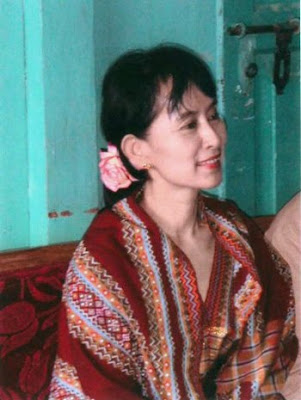 The Lady
The BBC has just reported that Aung San Suu Kyi, the Lady, has been sentenced to an additional 18 months house arrest by a court in Rangoon.

Ms Suu Kyi, a Nobel peace laureate, was convicted of breaking the terms of her house arrest by allowing American John Yettaw into her lakeside home in May. She had been jailed for three years with hard labour, but this was commuted to house arrest.

Ms Suu Kyi had denied the charge but said she expected to be convicted.

It was no surprise that she would be hound guilty by the sham trial. After all it would never do to let the Lady actually take place in an election again. Better for that maggot Than Shwe and his junta of vermin to prevent her from participating than having to ignore her inevitable victory. 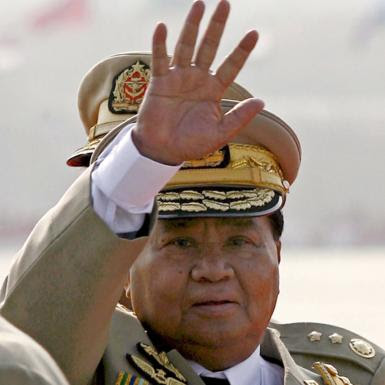 Than Shwe - A piece of human excrement
Posted by jams o donnell at 7:51 am

Anything that frightens a colonel or a general has to be good.

Hope they fear her ghost too.

Excellent heading dito post...
Hope that Turkey gets a Lady like her.)
The 500+ generals in the TR feel still macho without female officers..))
kindest
hans

Agreed Snoopy, hopefully she will scare the bastards to death

I hope she outlives them by a lojng time James!

Thanks Hans. I hope the turkish generals don't get the idea of staging a coup.

How much power a small lady has over a dictatorship.... Amazing! A little will power and strong belief in ones ideology is all one needs....

As for the Turkish Generals nothing scares those bas@#$ds....

SHe really does. It would be nice to think that one big push would topple those scumbags

Perhaps thetre is a diminutive lady with with a pure heart who would scare the hell out of them Nevin!

Much power to this lady...Happy WW!

Agreed Irina, I hope she can win!

I'm also suspicious of Yettaw's action. If he had wanted the safety of this great Lady, he would not have broken the terms of her house arrest. Even though not elected, she'll always be a leader in that story.

YES!!, than shwe - A piece of human excrement!

I know Claudia Yetaw was at best a nut at worst a scumbag. She is the Lady, she will never be defeated by the vermin junta

It's the best description Tabib!

That piece of human excrement should be flushed down the w/c with bleach!!

Yes, I've always thought that Yettaw was put up to it by the regime. It's all to keep her out of the elections.

I suppose Yettaw could have gifted the junta an excuse. If so they must have thought it was Christmas.. on the other ahnd I suspect some complicity

I feel so sorry for this lovely lady. The Generals are sleaze bags!

Sleaze bags is about the nicest thing you can call them!