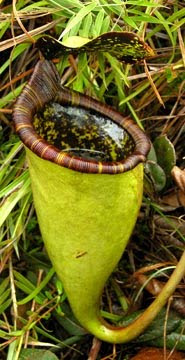 The Guardian has an article on naming new species that amused me:

Apparently Sir David Attenborough has quite a few species already named in his honour: a prehistoric lizard, a parasitic wasp, an echidna (or spiny anteater), a fossilised fish. Now he can add a huge carnivorous plant to the list. It is so big that it might possibly be able to digest a small rodent

Sir David is delighted that the plant was given the scientific title Nepenthes attenboroughii by a team of botanists led by Stewart McPherson, who discovered it during a plant-hunting expedition to Mount Victoria in the Philippines.

"I like these oddball plants and this is a very dramatic one. It can hold up to two litres of water in its jugs," says Sir David. "It is a very nice, complimentary thing for this young, intrepid explorer to do and I am very touched that Stewart McPherson should have done it in my name."

Every year, more than 15,000 new species of animal alone are recognised by scientists. Modern scientists, while blind to the commercial potential of a new species of coffee plant called Starkbuckii or a prehistoric cow named McDonaldae, often have a weakness for honouring random celebrities.

This year, a species of lichen was named Caloplaca obamae in honour of Barack Obama's support of science. Three species of slime-mold beetle were named (Agathidium bushi after George Bush, Agathidium cheneyi after Dick Cheney and Agathidium rumsfeldi after Donald Rumsfeld).

It is acceptable to name a species after a public figure but not after yourself, according to Steve Tracey of the International Commission on Zoological Nomenclature. Scientists naming discoveries after family members is also "a little bit naughty", says Tracey, particularly as the discoverer's name is anyway placed next to the species name so authorship is not forgotten.

His personal favourites are humorous: the mollusc of the genus Abra that was given the species name cadabra,...

They must have been rolling in the aisles....
Posted by jams o donnell at 8:30 am

Is that true? I mean i believe it about David attenborough but the rest? I thought: I know Jams; he will make things up!

Amazingly Liz, for once I'm telling the truth!

It is actually a beautiful plant... It is also amazing that a plant can swallow a small animal... that must be a scary sight to watch!

Are there any families of cats called Jams?

It is amazing isn't it Nevin?

Not yet Jams but we shall see!

That is some form of a pitcher plant.

Any new species of dung beetle should be named after Galloway.

As far a Cheney goes Google Iron Cheney on You Tube for a comedy classic.

It's an amazing palnt. As for Galloway there are far nastier things out there than a useful dung beetle

The liquorice pipes I used to smoke and finally eat, once in the past millennium when I was five or six had an amazingly similar shape.

Not exactly what I would plant in my garden!!!!

And if the same size, Sean they would last for weeks!

I don;t fancy one that could engulf a cat!

Naming something is a scientist's dream! And I love the ones that are creative. Fruit fly geneticists are the best at naming genes, for example.

Ah AF yo have the advantage on me there. It's a long time since I read the science journals so I would ahve missed such namings!

At first glance as the picture was loading, for some strange reason I thought of a toilet and the seat lifted up.

Haha now you mention it!

localy we do have many of this type of species though without checking it is hard to know if it is of the same type. they r very exotic, the flowers beautiful in a way like a stick with a feather at the end for dusting and can grow to quite big sizes

Lichen named after POTUS? Hmm... it's a case for the Secret Service, I am afraid.

And these jugs that hold two liters of water... Jams, take care ;-)

Perhaps they have grown bigger ones in secret greenhouses to dispose of unwanted questioners!