Some readers may be curious as to why I posted yesterday a three-part timeline of persecution of the Roma in Europe and an item about the sterilisation of Roma women in Slovakia.

The reason is that today is the day that Romani commemorate the attempted destruction of their people by the Nazis. Apart from the Jews the Roma were the only other ethnic group to be targeted for extermination (Stating this does not in any way diminish the appalling acts of barbarity meted out by the Nazis on other victims).

Why 2 August? 65 years ago today Zigeunernacht (or the Night of the Gypsies) took place. The following is based on an article at I Survived 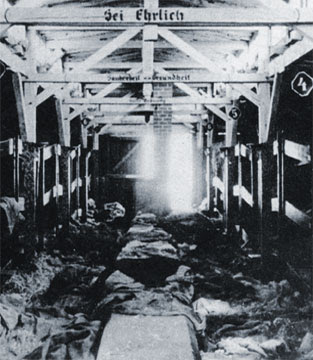 Inside the Zigeunerfailienlager
In December 1942, the Germans decreed that the Romani (Gypsies) should be imprisoned in concentration camps. Auschwitz was the camp chosen. The first transport arrived on February 26, 1943, and housed in the Familienzigeunerlager or Zigeunerfamilienlager ("Gypsy Family Camp"). It comprised 32 residential and 6 sanitation barracks in Section BIIe of Birkenau

A total of 20,967 men, women, and children were imprisoned in the family camp between February 26, 1943 and July 21, 1944. A further 1,700 Romani from Bialystok, were not entered in the records. They were suspected of carrying typhus, so they were sent straight to the gas chambers.

Most of the inmates died of disase.Some children also died at the hands of the evil Dr. Josef Mengele's during his perverted experiments. However this did not prevent the Nazis from deciding to destroy the family camp.

Romani children subjects of Mengele's vile experiments
In fact they intended to exterminate the Romani completely as early as May 1944. On May 15, Zigeunerfamilienlager director Unterscharfuehrer SS Georg Bonigut ordered the inmates to stay in their barracks. The next day, 50 to 60 SS men surrounded the camp. They attempted to force the prisoners out of the barracks, but failed to do so. Fearing casualties, the Germans withdrew. The Germans also feared that a mutiny could spread to other parts of the camp. On May 23, over 1,500 Gypsies were transferred from Birkenau to Auschwitz, from where they were subsequently transferred to Buchenwald. Two days later, 82 Gypsies were shipped to the Flossenburg camp and 144 Gypsy women to Ravensbrueck. Fewer than 3,000 people remained in the Family Camp.

The extermination of the Romanies in Birkenau occurred on the night of August 2/3, 1944, on orders from Reichsfuehrer SS Heinrich Himmler. A ban on leaving the barracks was imposed on the evening of August 2. Despite resistance by the Gypsies, 2,897 men, women, and children were loaded on trucks, taken to gas chamber V, and exterminated. Their bodies were burned in pits next to the crematorium.

Out of a total of about 23,000 Romanies were imprisoned in Auschwitz-Birkenau; approximately 21,000 of them perished. The remainder were transferred to other camps. They labored in industry. They were were also subjected to further criminal medical experiments including experiments on the effects of drinking sea water at Buchenwald.
Posted by jams o donnell at 4:04 pm

Hard to stomach,...man's inhumanity to man

It was a horrifying event HGF and needs to be commemorated

For the whole post series: Good on you, Jams!

Yes, it is often forgotten that Gypsies, homosexuals, trade unionists and others on the left perished too.

I had not realised the significance of the date, but I did know how much the Romani suffered at the hands of the Nazi's...

I am still remembering the exhibition I saw in France last year of all the victims, it quite turns the stomach...

I can imagine Cherie. The last time I went to a holocaust exhibition I would have punched a neo nazi had I encountered one

Shocking, especially that photograph. When I think of the capacity of humanity to inflict horror, I'm just ashamed.

It is very interesting for me to read that post. Thanks for it. I like such themes and anything that is connected to this matter. I definitely want to read more soon.

Olga Langyel the author of The Five Chimnyes the Story of Auschwitz, gave a vivid account of that night, she praised the Romanies for their resistance, everybody at the camp was so overwhelemed by their fight of survival to the very end. May they all R.I.P - Thomas