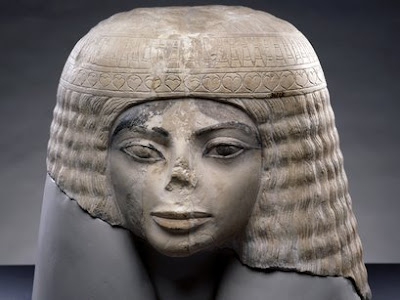 “references in the Annals of Tacitus to a singer called Gyratus who sang popular songs including Tenere Me Ama, Non Adamare Non Possum and Nunc hic aut numquam. Unfortunately I am not sure we will ever determine whether Elvis is a reincarnation of Gyratus or if indeed he is immortal. Then again some things should remain within the realms of faith”

Now we have proof positive that Michael Jackson did not start his career in the early seventies in the Jackson 5. A sculpture on display at Chicago’s Field Museum, indicate that he had a career entertaining Pharaohs over three Millennia ago

According to the local pressin Chicago the Field Museum has had a limestone sculpture (above) from ancient Egypt on display since 1988. However it is only recently that it has drawn attention. This is surprising since it is a perfect likeness of Jackson right down to the disfigured nose.

“I have no idea whether Jackson ever visited the museum,” a Field spokesperson said “But it could be proof that Jackson started his career in entertainment 3,000 or so years ago. There are a number of hieroglyphic messages that we need to decode, but they seem to refer to a singer with a strange nose who walked as if he was imbued with the spirit of Thoth (the Egyptian Moon god)."

If further proof was required Jackson cast himself as an interloper in ancient Egypt in his video for “Remember the Time,” so maybe he was paying tribute to his Egyptian roots.
Posted by jams o donnell at 2:22 am

I was pleased with that one James!

I bet even the Egyptians found his strange!

That is an amazing likeness, isn't it? But I'll bet it will increase the number of visitors to see it, so that's not a bad thing.

It's wonderful eh? I hope those who flock to see it will also linter to see other exhibits!

I wonder if there is a before and after to that Egyptian sculpture?

The similarities are quite eerie!

The likeness is amazing eh? I reckon the person started off looking rather more Nubian!

how amazing to have had michael jackson in ancient egyptian times... i wonder whether they did really have anybody like him. it wouldnt' surprise me at all if many of the figures in popular entertainment worked in bordellos in past lives (madonna) or danced before kings (michael jackson)... etc etc

those features do look strikingly similar


i always thought the kings of egypt looked black to me

michael jackson used to be black

so he could actually be that mysterious ststue...!

Ah let your imagination wander to those past times. He may well have sung Thriller back then.... but in hieroglyphics!