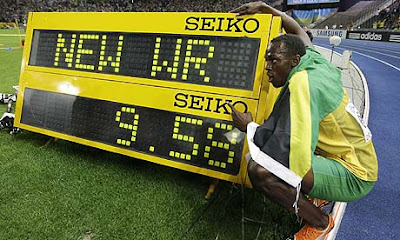 It may be the opening weekend of the new football season (Yes I support my local side West Ham but I still think that teh Premier league is fullof show ponies with far more money than talent), England and Australia may still be set fair to end that tedious set of events that is known as a test series (How can you have a game that can last five days and still end up with a draw?????). As ever there are usually ar more interesting sporting events going on.

This week the world’s elite athletes convene in Berlin for the World Athletics championships. We have already seen a star of the sport further consolidate his grip on his chosen event:

Last night Usain Bolt lowered his 1000m world record by an enormous 0.11 of a second, taking the time down to an amazing 9.58 seconds.

"I can definitely say it's the best feeling ever," Bolt told the spectators. After what they had just seen, they probably felt the same way. Even his competitors could not quite believe it. Asafa Powell, who finished in third place, said: "When I saw the time, I knew I had to go out and catch him. But even after the finish I couldn't catch him."

"I knew it was going to be a great race, and I executed it. It's a great time, a great feeling, I feel good in myself and I knew I could do it. There was a big build-up, great atmosphere. It wasn't going to be an easy race, but I had a perfect start and just went from there. I came out here to do my best and I did what I had to do."

Tomorrow, Bolt will start his campaign to make the 200m final. "There'll be no partying for me ahead of Tuesday," he said. "I'll rest up as always." 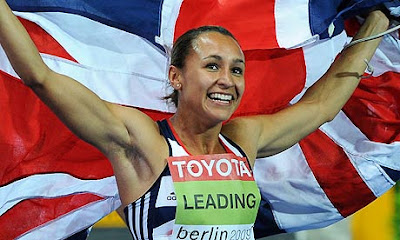 Britain’s showing in top level athletics has left rather a lot to be desired in recent year so it is a great pleasure to see that Jessica Ennis has won the Heptathlon title in emphatic style. In winning a world title she has done something that the great Denise Lewis never did

Anonymous said...
This comment has been removed by a blog administrator.
4:17 pm

Anonymous said...
This comment has been removed by a blog administrator.
4:18 pm

Anonymous said...
This comment has been removed by a blog administrator.
4:18 pm

Anonymous said...
This comment has been removed by a blog administrator.
4:59 pm

Anonymous said...
This comment has been removed by a blog administrator.
5:26 pm

Mr Bolt obviously has a very special yohurt in his fridge.

Perhaps it was slightly off and the toilets were after the finish line! Seriously that was a magnificent run!

i thought he was spectacular at the olympics- he is truly amazing.

He was absolutely amazing eh Betmo