Mot so much Ahmadinejad than Ahmafeckingnutter 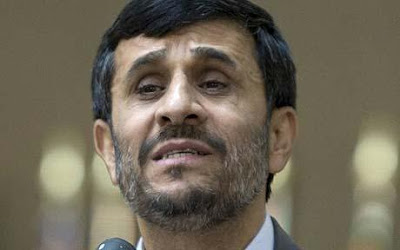 The Babylon and Beyond blog had an article which indicated that Ahmadinejad may be looking to be rather less than conciliatory after being sworn today as President president.

It would seem that Ahmadinejad may look to be rather more confrontational towards opposition. According to Babylon and Beyond this is borne out by comments comments he made to a gathering of educators associated with the pro-government Basiji militia last week

"A new period has begun," he told the Association of Basiji Scholars according to a report by the news website Farda News. "Let me take the oath of office, and wait for the government to begin its work. Then, we'll seize them by their collars and stick their heads to the ceiling," he said.

Ahmadinejad is now also reportedly claiming that he was the victim of electoral fraud rather than the perpetrator! According to a report by the reformist newspaper Entekhab, Ahmadinejad also boasted in a private meeting with aides that he actually received 30 million out of 40 million votes cast, not the 24 million he officially got.

I wonder what the colour of the sky is in his world?
Posted by jams o donnell at 9:00 am

A total nutter and thus the golden boy of the nutter regime and the world finance.