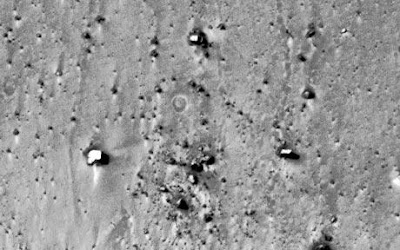 There's a monolith in here, honest!
A rectangular object found jutting out of Mars's surface and caught on camera (you can see it absolutely clearly in the above photo) by the University of Arizona has caused speculation over the nature of the "monolith" and its origins.

According to the Telegraph the scientists at the University of Arizona who captured the image from a powerful camera on board the Mars Reconnaissance Orbiter satellite, insist that the structure is a normal, if striking, natural phenomenon.

Needless to say parallels are being drawn with monoliths 2001: A Space Odyssey. But not by the University Alfred McEwen, professor of planetary science "Layering from rock deposition combined with tectonic fractures creates right-angle planes of weakness such that rectangular blocks tend to weather out and separate from the bedrock. It is not that unusual. There are lots of rectangular structures on Mars. It is striking when you see one that is isolated, but they are common." 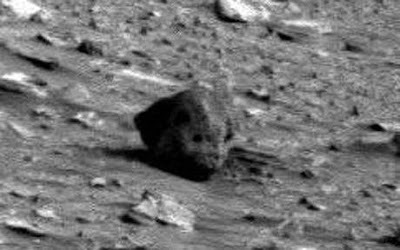 Veteran astronaut Buzz Aldrin recently stoked space conspiracy theory further by announcing that a similar "monolith" had been detected on Mars's moon Phobos. "There is a monolith there, a very unusual structure on this little potato-shaped object that goes around Mars once every seven hours. When people find out about that, they are going to say 'who put that there?’ Well, the universe put it there, or if you choose, God put it there."

Monoliths? Whatever... let it join the face and all of the other so called structures in the title to this post. One thing is for sure. Mars seems like a Pareidolia paradise
Posted by jams o donnell at 9:39 pm

Good blog has been posted by you..

Is it just me or does it look like a woman leaning back with her arm outstretched in the second photo?

Could be Pouty Lips/ Paridoilia is a thing to be treasured!