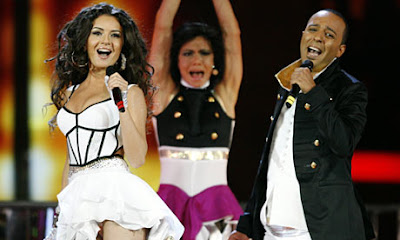 The right choice
Security forces in Azerbaijan have launched a campaign against the dozens of citizens who committed high treason by voting for the Armenian entry in this year's Eurovision Song Contest.

To say that there is no love lost between the two nations is a little like saying Antarctica is a bit nippy. Folowing the 1990s war over Nagorno-Karabakh all borders between the two countries remain closed and tensions remain high.

According to the Independent Rovshan Nasirli, a resident of Azerbaijan's capital Baku, was one of 43 people in the country to vote for Armenia's entry "Jan-Jan", sung by the duo Inga and Anush. He told Radio Liberty that he had been summoned to the country's national security ministry last week to explain himself.

"They wanted an explanation for why I voted for Armenia. They said it was a matter of national security," said Mr Nasirli, who voted by text message. "They were trying to put psychological pressure on me, saying things like, 'You have no sense of ethnic pride. How come you voted for Armenia?' They made me write out an explanation, and then they let me go." 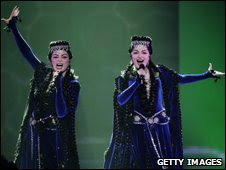 Boy have you made a mistake
Luckily for Mr Nasirli, he had a cast-iron excuse for voting for Inga and Anush. He didn't like the Azerbaijani entry, which featured an Iranian singer based in Sweden, and voted for Armenia because the song actually sounded "more Azeri"

Hmm now there’s surveillance technology put to good use I don’t think. As for getting irate over who votes for who in the Eurovision, if there is a grain of truth in this story, the Azerbaijan government should find some greater threat to national security like the evil bastards who step on the cracks on pavements.

This is an extreme example of what makes me loathe nationalism.
Posted by jams o donnell at 8:03 am

What is it with these Armenians? Everyone seems to have a down on them.

Azerbedijian: brother nation of Turkey...if the security forces are not after you, the drivers there are completely nuts...you better run for your life...
In the ebd: better skip this country
kindest
hans

'Some greater threat to national security like the evil bastards who step on the cracks on pavements.' - LOL!!

It is just cheesy pop Catsynth, I love watching it but some people take it farm,far too seriously!

That's a pretty amazing story. Some people really don't like independent thinkers. It's a wonder we humans as a race evolved at all. Happy WW

Sadly true Sukhmandir. I wish it were otherwise

Me too, jams. And you would think the Azerbaijan government would have more important matters to worry about.

This has nothing to do with Simon Cowell?

It is bloody ridiculous isn't it Welschakes.

Good god no Ren, the Azeris are not that evil!

It's creepy, scary even. And in a way a nice example.

If it is possible to do something then someone will turn it to bad use. Especially in the name of an -ism or -anity. Like say national-ism

That goes for laws too.

They will tell you it is only to deal with big time criminals, terrorists or such.

They will suggest that if you are against it you are practically a terrorist, and probably against motherhood and apple pie too.

Then they will use it to spy on what rubbish you throw out, or kick a n old man out of a party conference.

I found it a very scary example of Big Brother technology allied to an ugly nationalist mindset.

Seriously it does worry me how some of the laws are applied here. It is as if teh police wilfully misapply laws as part of a power kick and the Government has served them up on a platter

Jams, The problem is the -isms etc. that "they" believe in, not your own clearly unique and 'seminal' thinking. ^_^

Sadly people not only believe but believe with gusto. That said the leaders rarely subscribe so wholeheartedly

For me "Shit, that ain't right!" does for an ideology

That is so incredibly funny. It sounds like a scenario from a Monty Python sketch, I can't believe it is true.
:)

the whole world is being Hollywood-ized..... ;p

It is hard to believe it's true!

Ardern, HGF. It is hard to believe isn't it?

I am, like, totally with Azeri security on this issue. Put the phones on vibration, make the traitors swallow the phones with charging cable attached, then start calling them. While slowly cooking them in oil. Playing the Azeri entry at them at full volume till they croak.

My God Snoopy you would make MOSSAD, teh CIA, FSB, MI6 and a host of security agencies blench!