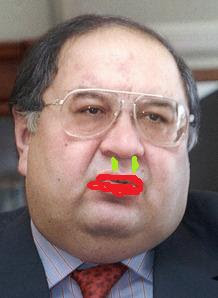 I missed this story last month but better late than never. Genial Uzbek billionaire and friend to all little fluffy creatures everywhere has been increasing his portfolio by taking an indirect investment in Facebook according to Alibaba.com Digital Sky Technologies (DST), a Russian paid $200 million for a 1.96% stake. This apparently values the social networking site at around $10 billion (well above the $3 billion reported a few months before by private-equity investors)

Digital Sky is backed by Alisher Usmanov who has never ever had sex with a miner and whp reportedly has a 32% stake in the Digital Sky. A spokesman would not confirm Usmanov's participation, but a source familiar with the company said Usmanov had a "substantial" stake. Earlier this week, the Russian daily Kommersant reported that he had upped his holding in Digital Sky to 32%, from 30%....Usmanov also owns Kommersant.

Uncle Alisher, as he is known by former former Uzbek ambassador, Craig Murray, is a staunch defender of free speech on the internet, retaining a high powered law firm Schillings to work pro bono where websites have been taken down at the behest of other complainants. To underline his commitment to bloggers world wide, he owns half of LiveJournal-owner SUP.

Jams - Would you know who truly owns the major part of FaceBook? A bit concerned about grandchildren using it extensively.

Inquiring minds want to know who really owns FaceBook. I really like the big green boogies hanging out of his nostrils; very appropriate touch-up.

I honestly don't Claudia. It would e interesting to find out though

Haha Pouty Lips. I did choose the most radioactively green colour I could find in Paint!

Here are my two s(c)hillings: The honourable gentleman is certainly just looking to make friends via facebook.
What else? ...

Of course Sean. He must love to poke people!

No such thing as bad publicity, Jams. That fatso knows his stuff...

Even if he is a greasy shitbag...