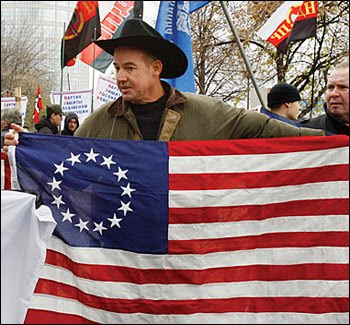 Preston Wiginton an American white supremacist was stopped from entering Britain to attend a British National party festival this weekend.

He had planned to attend party's Red, White and Blue festival in Codnor, Derbyshire, which started today.

Wiginton is a kamerad of Griffin and is truly a nasty piece of shit. The UK is far better off for his exclusion.

Further details on Wiginton (and why he is scum) tomorrow.
Posted by jams o donnell at 8:36 pm

Can't wait for those details.

Some of my friends are attending the counter demo tomorrow. I hope they will be OK.

unfortunately, the united states is rotting from the inside. we have far too many of these pieces of sh**

Hmm. What a pity. Sure you don't have a little space somewhere to tuck him away on those mighty shores. Under a smallish rock somewhere? I wonder if we can set up a road block before he has a chance to get back. Maybe he'll sail instead that might give us a better chance to keep him in the water, although not necessarily afloat.
Cheers

Anonymous said...
This comment has been removed by a blog administrator.
2:58 am

Anonymous said...
This comment has been removed by a blog administrator.
4:05 am

Basically he is a typical piece of racist shit James. I will post later

I hope so Cherie. Good for them attending the counter demo

Ah Betmo take solace that the US is not alone.. God is that solace?

I love your way of thinking Maddy!

Curious about more details...never heard about the guy, and it doesnt sounds promising!
Kindest
hans

It amazes me that people will give so much time and energy to brew negativity in the world. I don't know how they sleep at night times.:(

They probably dream of the Fourth Reich... although they atre in truth fifth rate!

To let him in, and not let him out (as Maddy suggests) would have been fun to see. Big Headline: USA tells UK: You got him. Keep him. Enjoy his merde. We've got plenty more here, if you want it.

Of course, then he would wrap himself in the full stars American flag, and would seek the rights scumbags like him want to deny to others.

Haha Claudia. We seem to have our own grass roots racist scum, we don't want an American racist!