L Ron Hubbard was a fraud (no surprise there!) 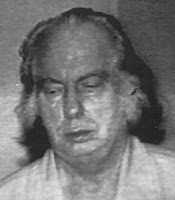 Discovering that Lafayette Ron Hubbard (left) - writer of abysmal pulp science fiction, proponent of diuretics, (sorrythat should be dianetics) founder of the church of scientology and all round bullshitter and charlatan - was a fraud should be akin to finding out that the sky is blue or that water is wet. However, 30 years ago the British Government devoted time to determining the extent of his fraudulence.

According to the Times scientologists had threatened to sue the British Government for libel after it banned in 1968 followers from entering the country to visit the sect’s world headquarters in East Grinstead, West Sussex. To defend itself, Britain needed to establish whether Lafayette Ron Hubbard was a charlatan. L Ron Hubbard was also subject of an exclusion order.

Diplomats found that Hubbard had awarded himself a PhD from a sham “diploma mill” college that he had acquired. Department of Health files released early to The Times following a request under the Freedom of Information Act.

The papers include a signed statement by a former senior Scientologist who said that he had been informed of the doctorate scam by one of Hubbard’s collaborators.

“I understand it is asserted that L. Ron Hubbard was awarded the degree of Doctor of Philosophy by Sequoia University on February 10, 1953, in recognition of his outstanding work in the fields of Dianetics and Scientology and that the said degree was recorded with the Department of Education of the State of California. The position is L. Ron Hubbard [and others] acquired premises somewhere in Los Angeles which they had registered as a university called Sequoia and immediately awarded each other doctorates.” 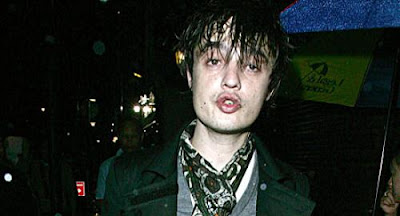 Junkie and all round arsehole Pete Doherty.. a the poster boy for the Church of Scientology?
Whitehall officials asked the British Consulate in Los Angeles to investigate him. The answer came from Los Angeles on April 26, 1977: “After exhaustive enquiries we have now tracked down organisation named which was closed down by state authorities in 1971 and all documents impounded. The facts are that it neither has nor ever had approval and its status is not recognised in California . . . It is a ‘will of the wisp’ organisation which has no premises and does not really exist. It has not and never had any authority whatsoever to issue diplomas or degrees and the dean is sought by the authorities ‘for questioning’.”

Although it was not as if L Ron Hubbard was photographed munching on the bones of an infant it was an indication of the man. After all he was a pathological liar who found an ideal way to con thousands of dupes out of their money. Surprisingly his ridiculous cult has continued to thrive, raking in even more money from even more idiots
Posted by jams o donnell at 2:52 pm

Well, you said it in the first paragraph but it's been known for some time. That is precisely the type of person who gives Christianity a bad name. I don't know - they shove the word Christian in front of their name and do as they wish.

Is it just me, or does Pete Doherty look like he's about 50 years old? Lay off the drugs man - you're looking rough.

Not sure about L Ron being christian what with the belief ibn Xenu, the space tyrant who flew intergalactic DC8s!

Pouty the little jerk is certainly a good advertisment for avoiding drugs!

Had you signed for one billion years membership, you'd not have written such nasty things, Jams.
Masterminds like John Travolta and Tom Cruise who once used ten percent of their brains, and meanwhile about zero, will not be amused.

Back in 1961 I went along with some friends to do free IQ and personality tests with the Scientologists. we were members of a church youth group, and found their philosophy rather at odds with Christianity, and said so. They replied that they were neutral about religion, and people of any religion could join and take their courses. Seven years later they were calling themselves "The Church of Scientology" - go figure, as they say in the classics.

There are obvious benefits, particularly in the USA, for being a church and since the Scientologists obviously worship the $....

What always made me so sad about this cult is that children have been deprived of much needed medical treatments because of their parents'adherence to the Church. It calls many illnesses psychosomatic. It's ridiculous and tragic.

It's foolish isn't it Claudia

Speaking out against Scientology can
cause many problems. The group has been known to harass its critics. One such episode had a reporter harassed and screaming incoherently at the people harassing him. Of course the tape was played and the reporter was made to look like a blathering idiot, or a typical writer for Counterpunch.

In the USA I had the misfortune of
bumping into them in Dupont Circle
not far from the Phillips Museum.
I told them to take a hike and them annoy me while I was in the area. A not so friendly NYC style
message was required, before they left me alone.

As you are a decent sort and lack a NYC accent I would avoid caution or prey that Ted would use his feline senses to make any intruders miserable.

They are a bunch of arseholes when it comes to litigation. They have had the odd stall in local shoppping mall. They didn't seem to drum up much interest.

I may not seap like a Noo Yawker BBeak, but my accent can slip in to a guttural East London!

I hope you are right as they can be very nasty and persistent. Even though I think the Church is a scam and have the book that trashes Hubbard I keep quiet.

Finding that book was not easy and took many months through booksellers in Northern Vermont. Members of the Church are said to buy copies as soon as they are available.

If you do get a copy. DO NOT READ IT IN PUBLIC. I kept my copy at home and never discussed it.

The Title of the Book Is Messiah or Madman.

I do not know if it is available in the UK because you do not have a first amendment and stores may not sell it. Indeed owning a copy in some
interpretations may constitute a hate crime.

However, if a friend is traveling in the states.....

Let me know if that title is even available in the UK.

Beak I know about Fair Game and Suppressive Persons. Scientologits are a bunch of litigious bastards, defending a ridiculous and money grabbing cult.

I have a copy of Russell Miller's Bare Faced Messiah, written in the 80s. Madman or Messiah was published here but both seem to be out of print now. Copies are still easily available though

goes to prove that the 'stars' have more money than sense. i won't get started on my take on 'religion' of any kind- as this is your domicile :) i just don't see that much difference in any of them...

I am decidedly non religious, having been brought up Roman Catholic!

The Scientologists and other such money mills are interested in money and power, nothing else.

Being a fraudster and a liar doesn't make his brand of religion less, how to say it gently, reasonable than the other brands. If you see what I mean ;-)