A tale of penguin eggs goes on sale 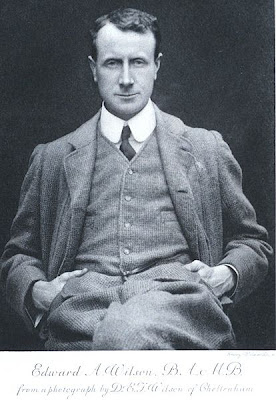 Next month auctioneers Bonhams will be selling significant items of Edwardian exploration memorabilia – a 40-page handwritten account by Edward Wilson (above) of a 1911 journey to gathering Emperor penguin eggs from their remote breeding grounds.

Today’s Guardian reports on this story. Wilson, known as Uncle Bill by companions, was part of Captain Robert Scott's team. A naturalist, physician and painter, Wilson was with Scott at the South Pole in 1912, only to find Roald Amundsen had beaten them to it. When the frozen corpses of the British explorers were found in November, Scott's arm was around Wilson.

The story of the race to the South Pole has overshadowed a similarly remarkable tale the year before. The Antarctic winter expedition led by Wilson was immortalised in print by Apsley Cherry-Garrard in his book The Worst Journey in the World, who, with "Birdie" Bowers, made up the three-man team.

Cherry-Garrard's adventure account became a bestseller but he admitted: "The horror of the 19 days … would have to be re-experienced to be appreciated; and any one would be a fool who went again." In his diary Scott called the expedition "one of the most gallant stories in polar history."

Much of the trek was in silence because talking proved too difficult. At night the men had shivering fits, shaking to the point they thought bones would break. The conditions were so appalling, so unexperienced by human beings, it took them five hours per day to get out of their tent and prepare for the journey.

That the men made it to the roosting grounds was a minor miracle and Cherry-Garrard credited Wilson's "patient, self-possessed, unruffled" leadership skills. "He was the only man on earth, as I believe, who could have led this journey."

People today know all about the bizarre roosting behaviour of the Emperor penguins, gleaned from TV documentaries. But the three men who arrived, finally, at Cape Crozier were witnessing something unseen by human eyes – the male penguins incubating eggs in winter.

There were far fewer penguins than anticipated, probably only 100 or so and the explorers found some birds were so desperate to nurse an egg they incubated lumps of ice, rounded into egg shapes. Wilson had been convinced that the penguins were a kind of missing link between reptiles and birds and that studying their eggs would reap great benefits.

The manuscript, valued at £80,000 -£120,000, is quite matter-of-fact in conveying the difficulties they experienced but, says Bonhams, it "has sufficient colour for anyone with imagination”. The words have been known to historians because a transcript is held by the Scott Polar Research Institute in Cambridge, but until experts went through effects put up for sale by Wilson's descendents the original was thought lost.

Jon Baddeley, Bonhams' head of collector's department, said: "It is a remarkable document. We had absolutely no notion that we were going to come across it."

When Cherry-Garrard arrived at the Natural History Museum with three prized penguin eggs he was allegedly met by a custodian who said: "Who are you? What do you want? This ain't an egg shop." When he got someone to take the eggs, Cherry-Garrard was then forced to wait hours for a receipt.

Ah there’s nothing like a good British ending to a Boys Own adventure!

Gosh you find some interesting topics. Now I'd like to read that.

Great post, Jams. Many thanks. Five years ago, I became fascinated with the South Pole's Expeditions through Beryl Bainbridge's mesmerizing book "The Birthday Boys." Then my son hunted used bookstores for me to find Scott's Last Expedition and Cherry-Garrard's The Worst Journey in the World. I love 'Uncle Bill'. He always was a child at heart. By this, I mean in the pleasure of discovery and in his undying scientific curiosity, even though life was so dismal. I hope I'll have the chance to read his notes.

Thanks it's a great story that really caught my eye!

You wonder how they survived given their 'expedition gear'. Interesting story. :)

Ah HGF A man can go anywhere in his tweed and pluus fours!