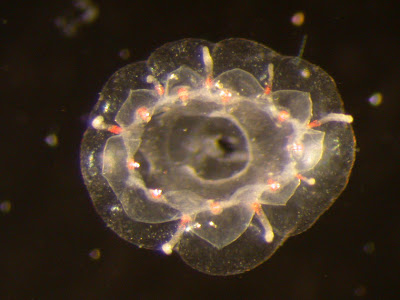 Well not the city itself (I could not possibly comment on the testicular nature of Tasmania,s first city) but a coelenterate (Oops I should say Cnidarian but my knowledge of taxonomy is years out of date...) discovery in (or near) the city.

According to ABC News Tasmanian scientists have discovered a new species of jellyfish in Hobart's River Derwent.

Scientists who discovered the jellyfish while surveying the waters outside the CSIRO (Commonwealth Scientific and Research Organisation) in Hobart, have named it Csiromedusa medeopolis, meaning "jellyfish from CSIRO" and "city of gonads". The species is only a few millimetres wide and scientists say it looks like a flying saucer with a cluster of gonads on top.

Launceston jellyfish expert Lisa-Ann Gershwin said "It's absolutely different from every other jellyfish that's ever been known.So we not only put it into its own new species and its own new genus, but it's actually a brand new family....Quite possibly and quite humbly the greatest discovery of my career, ever. I mean I'll be lucky if I ever get a discovery even half as incredible again.... You know any mum with a new bub is always excited, but when you have a whole family of new bubs I think it's triply exciting."

The jellyfish is harmless to humans.

There you go. I love Ms Gershwin’s enthusiasm. If I had found a whole new family then I would be just as delighted I’m sure!
Posted by jams o donnell at 8:35 pm

It looks very sparkly in the photo!

That's nothing. Here in the U.S., we've found a new species of jellyfish in the Democratic caucus in the U.S. Senate...

It does doesn't it Cherie!

Haha Steve, sadly it will take millions of years for them to grow a spine!

wow - Launceston has its very own jellyfish expert!

Well there you go NurseM!