Just as well the Devil has the best tunes 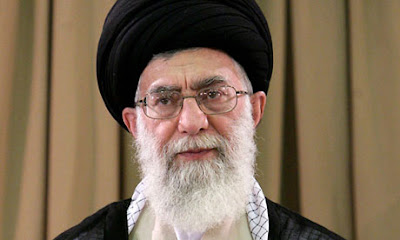 Ayatollah Ali Khamenei, in a fit of woefully predictable stupidity,has decreed that music is "not compatible" with the values of the Islamic republic, and should not be practised or taught in the country.

In a comment which ranks up there for ridiculous fanaticism with the Taliban, Khamenei said: "Although music is halal, promoting and teaching it is not compatible with the highest values of the sacred regime of the Islamic Republic."

Khamenei's comments came in response to a request for a ruling by a 21-year-old follower of his, who was thinking of starting music lessons, but wanted to know if they were acceptable according to Islam, "It's better that our dear youth spend their valuable time in learning science and essential and useful skills and fill their time with sport and healthy recreations instead of music," he said.

Khamenei's views are interpreted as administrative orders for the whole country, which must be obeyed by the government. Last month Khamenei issued a controversial fatwa in which he likened his leadership to that of the Prophet Muhammad and obliged all Iranians to obey his orders. (Don’t be modest!)

Houshang Asadi, a former cellmate of Khamenei before the Islamic Revolution said: "He hated the music from the beginning."

"There were times I sang a song by Banan (a popular vocalist) for him and he told me to avoid music and instead pray to God", said Asadi, who shared a cell with Khamenei for four months in Moshtarak prison in Tehran in 1976 and stayed friend with him for several years after the revolution. "The only music he liked was revolutionary and religious anthems," said Asadi.

The man has already shown he has no heart but now he proves he has no soul. Bloody idiot!
Posted by jams o donnell at 8:13 pm

Not only he has no heart, no soul but also no brains. Does he really think that young people will obey and give up music? Artists will die for the freedom to express themselves through their art.

Absolutely Claude, the man's off his bloody head if he thinks people will comply

perhaps best if he gets laid in a coffin! As for you Knatolee you would be seen as a scarlet Jezebel by Khamenei!

"The only music he liked was revolutionary and religious anthems," said Asadi.

oh
then he would like this one, wouldn't he

You're right no way would he care for that one JD!

I can guess there is a good reason for the old coot hating music. After all, spending four months in a cell with a guy who sings Banan all the time (whoever Banan is) could be tough ;-)

THere is that Snoopy!