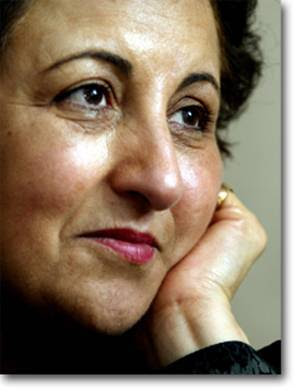 Yesterday Nobel laureateShirin Ebadi called for a fresh election in Iran under UN surveillance to end violence in her country and urged UN Secretary General Ban Ki-moon to visit Tehran.

"In order to have fair election results, there must be a re-election under UN surveillance," she told journalists during a visit to South Korea."I plead with the UN secretary general to come to Iran. He must see what's happening in Iran with his own eyes and talk to Iranians in order to write an accurate and truthful report,"

Many Iranians had begun employing new tactics to continue protests while avoiding arrest, she said.In one instance mothers of demonstrators who were killed or arrested wear black and gather in public parks on Saturday nights for silent protests, carrying pictures of their children, she said.

I wish her words would be heeded
Posted by jams o donnell at 9:36 pm

Sadly it is not very likely.

How is anything bar economic sanctions going to make a difference?

There have been many threats against her life and her family. Yet, she will never leave her country, and has no affection for Iranians who settle elsewhere in a so-called better life. To hear her voice gives me respect, admiration and hope for the Iran that she represents.

Yes, she's a brave woman. She is right - The UN General Sec should go there.

In order not to make certain readers feel awfully insulted - ha ha ha -, I shall compare just this woman and me:
While I - a pint of plain in my left, a bowl of most delicious chips in my right I do have (so far) nothing to fear when f.e. calling Mr Bush a debicile idiot, and both Mr Obama and Mr Putin ruthless bastards, this woman is risking her life by speaking out, day by day.
To cut it short: Women like her make the difference.

Thanks everyone. I do respect and admore M Ebadi

Hardly likely is it? I enjoyed her book immensely and have a great deal of respect for her.

Sadly very unlikely jmb. Still she is a great woman

Change, sadly, only comes from within when the leadership lets go a little. Look at the Soviet bloc for example.