And still the Iranian people protest. 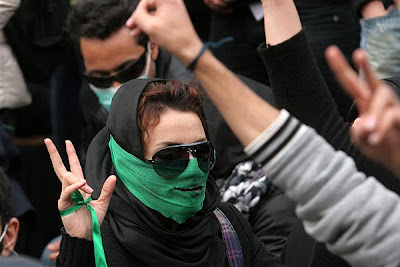 Today is 16 Azar in Iran. On this day the nation commemorates the killing of three students in 1953 under the former shah (Perhaps one day there will be a similar day in June to commemorate those murdered by Ahmadinejad and his cowardly rats). It has also become day of protest - students have used the occasion to hold pro-reform demonstrations.

Interfering with the internet and shutting down the mobile phone network in the centre of Tehran did not stop thousands of protesters taking to the streets, As the crowd chanted "Death to the dictator," riot police fired teargas and Basij militiamen charged the crowds beating protesters on the head and shoulders as the crowd scattered, then regrouped on nearby street corners.

Millions of Iranians are desperate to see change. They do not want the current regime and they are not going to stop protesting anytime soon. I dearly hope they get their wish sooner rather than later.
Posted by jams o donnell at 9:20 pm

Well, and correspondents via sm got order to stay in their offices until Wednesday.

Tells all about this regime, hm?

It certainly does Sean

I'm not sure I would have their courage. We have 3 Iranian senior ladies in my building who worry constantly about the younger family members, still in Iran. They never know if they are on the streets protesting. What I'm hearing is that it wasn't better with the shah.

It certainly was not bed of roses under the Shah. He was a vile man. THe Ayatollahs are worse in many respects

Is there any way to send Galloway to Iran permanently? If he thinks the government is so wonderful let him live there for a few years.

Well there is not a despot whose arse he won't kiss