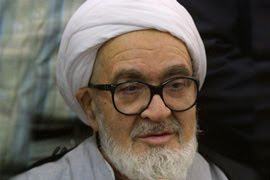 The BBC (and well nigh every other reputable news source) has reported on the death in Qom of Grand Ayatollah Hoseyn Ali Montazeri at the age of 87. His family reported that he died of natural causes.

Grand Ayatollah Hossein Montazeri was one of the key leaders of the Iranian Islamic revolution in 1979, which abolished the monarchy and overthrew Mohammad Reza Pahlavi, the Shah of Iran.

According to his Al Jazeera obituary Montazeri was born in 1922 to a peasant family. He left his home town in his teens to undertake religious studies in Qom, Iran's centre for religious studies where he became a protege of al-Khomeini.

He soon became active in the clerical struggle to overthrow the Shah. He was imprisoned in 1974 for his political outlook and was sentenced to death. The death sentence was later waived and Montazeri was released in 1978, just a few months before the revolution.

In the wake of the Islamic revolution in 1979, Montazeri became one of the senior leaders of the new administration and was named the heir to al-Khomeini.

Montazeri's star fell in 1989. Over the previous two years, Montazeri had strongly protested against the mass executions of political prisoners and criticised the Islamic system in Iran. He urged al-Khomeini to review to the policies of the state and take steps to rectify any problems within them.

But Montazeri's appeal to al-Khomeini incurred but the Ayatollah's wrath, In March 1989, it was announced that he had had resigned his post as heir to the supreme leader. Khomeini was then succeeded by Ali Khamenei who remains in place today

Montazeri was placed under house arrest in 1997 following his support for reformists, after which he remained largely silent until June this year, when he voiced support for Mir Hossain Mousavi, the reformist candidate in that month's presidential election.

He joined the protests which rejected the results of the polls, which saw Mahmoud Ahmadinejad, the incumbent president, win another term.

Perhaps unsurprisingly state-run media referred to him as a "simple-minded" cleric, references to him in schoolbooks were erased and streets named after him were renamed.

In early reports of his death the state news agency Irna did not use the ayatollah title in its early reports of Grand Ayatollah Montazeri's death and referred to him as the "clerical figure of rioters". 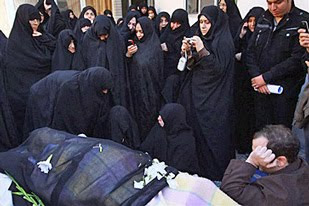 His funeral is scheduled to start at 0900 local time tomorrow He will be laid to rest at the shrine of Hazrate Masoumeh, one of the most revered female saints in Shia Islam. No foreign media will be allowed to attend.

It will be interesting to see what happens next. Montazeri’s death is certain to precipitate more protests. It remains to be seen how strong the protests are. It could be a damp squib or it might just be another nail in the regime’s coffin
Posted by jams o donnell at 5:43 pm

I've not lost hope so I'll pray for the latter.

You and me both Pouty!

sometimes history can only be read in retrospect. what the media report of him today will b different from what the history books say many years down the road. no regime can rule supreme for a long time once it has lost the reverence of the majority of the populace. reminds me of the great wall of Chine. once it is breached..........

what rubbish i write this morning and in so many words :)

Jams, I wish you a Merry Christmas

I vote for the latter, too!! Too bad logical, rational protest isn't heard over the ravings of lunatics.

That is true Bengbeng, Heres hoping the regime falls as soon as possible

They are all mad....just leave them blow each other to bits....anyone with any sense will get out of the way.

Let the peaceful religion reach its logical conclusion with them killing each other.....by the way I can say that....I am half Iranian.

I still hope for something good to happen EV, for the sake of my friends in Tehran

Jams I also have friends and family in Iran but this can never end until it reaches its end game. Its like watching Iraq all over again....too many factions fighting for power within Islam. It would be better for every Iranian to leave Iran and let the factions fighting for supremacy blow each other to pieces and the same goes for any unstable country. Let them all into America....that should annoy the clerics watching all their young and talented forced to leave Iran in favour of America!!!

EV I do realise that things could take the doomsday route very quickly - THe Revolutionary Guards are set up so they could become little warlodships pretty easily, the ethnic faultlines and so on. I shudder to think what might happen in Iran

MNOt every Iranian wants to leave for another country though/.

Your right Jams most Iranians are highly patriotic and love their motherland which makes the whole situation more heart breaking.....sorry if I seem cold towards the situation but I have some serious history with Iran and its all a bit raw for me to get involved.....I spouted it all in a blog one night drunk.... here is the link.

Bloody hell I can see why EV