The pope and copyright 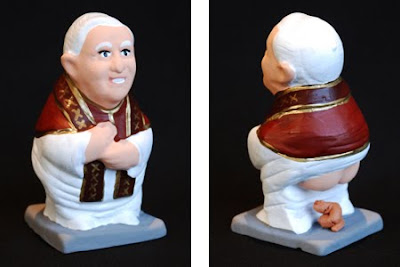 According to the Times the Holy See, in a move to control the use of the papal brand, has announced that in future anyone wanting to use the face or name of the Holy Father or Supreme Pontiff must obtain Vatican approval.

Robin Fry, a copyright lawyer from the London firm Beachcrofts, said: "This declaration is a brave attempt to control use of the imprimatur and image of His Holy Father, but this can only realistically be done through registration of trademarks. “

A spokesman for the Catholic Church in England and Wales said: “This is not about financial gain or commercial interests. It is simply an attempt to preserve the integrity of the Pope’s image at a time when there is a plethora of new media and there may be concern that it is used inappropriately.”

Hmm I wonder what sort of damages the will seek. A billion years in Purgatory? On the other hand I can’t wait to see the Vatican going to court to prevent Benedict’s image being used for a Caganer. I can see the Vatican getting royally Streisanded on the Internet if they do. The one at the top of the post is on account!
Posted by jams o donnell at 10:24 am

Very, very cruel but funny but others might not let you off so easily.

Actually it is a traditional Catalonian thing the caganer. They will caricature any celebrity by having them take a dump!

As a catholic turned atheist I'm going where it will be hot rather than holy Calum so I might as well be hung for a sheep as a lamb!

Royalties on holy poop as well? I already think about a means of payment ;-)

Now I truly worry about you. Not that you might burn in the far, far future. But that you might be burned while you're still alive, with the Pope and friends roasting marshmallows into the fire...Just scream SOS, Jams. I'll rush to save you!

Have to have one now. Every home should have a Bishop of Rome.

I'll have t get one for my parents!

This is what every home in American needs...a squatting defecating pope. But where's the manger?

Hmm wuld you want the caganer in you manger!!

Strange they would come up with it again, now.
Just checked my archive and: I posted about His Oddity converting to moneytheism in April 2008.

Ah God the father, God the son and God the holy litigator Sean?

Even my 3-year-old knows you're s'posed to do that in the potty!

And I at least provide a bedpan for my patients!

I thought maybe hidden in the nativity scene somewhere, but certainly not in the manger. What would the neighbors think? You know I have a reputation to uphold that took me 52 years to ruin.

I'm about to get busy here in a minute so I hope you and yours have a very merry Xmas.

Haha Pouty Lips. A very happy christmas to you and yours!