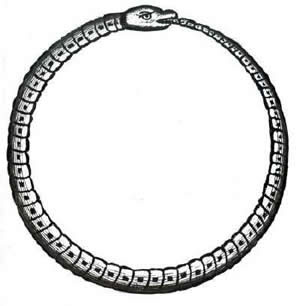 The Ouroboros, the image of a snake consuming its own tail, is an ancient symbol and appears in many cultures (although sometimes as a dragon or a worm, rather than a snake).

The Ouroboros is a symbol of cyclicality- that the Universe goes round and round, constantly recreated. Plato considered the Ouroboros to be the perfect, primordial creature For alchemists, the Ouroboros was a potent sigil (magical symbol), representing infinity or wholeness. For the great German chemist Auguste Kekule it was the inspiration that permitted him to work out the structure of the aromatic hydrocarbon benzene 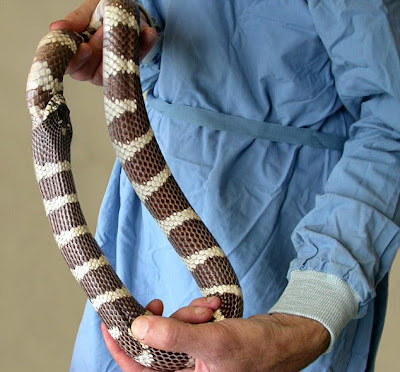 So what of Reggie the King snake? Reggie has been in the papers recently having decided to make a meal of his own tail, thus creating a modern Ouroboros.

The reptile's owner was able to take him to the vet before it had done any lasting damage.
The king snakes range is an American snake whose prey includes other snakes. They can grow up to seven feet and live up to 20 years in the wild, but can live much longer as pets.
The constrictors hunt a variety of prey from rodents to birds and other snakes... and at times even themselves. According to the vet who untangled Reggie 'There is a temptation for a snake-eater like this one to lunge at its own tail, especially if kept in a small enclosure. They can't spread themselves out and think their tails are another snake.'

A prosaic reason perhaps or maybe Reggie was dreaming of great human archetypes. Nah, he was probably just hungry...
Posted by jams o donnell at 12:37 pm

He would have been surprised at the end result had he finished.

Very surprised, if not shocked and stunned!

That's one of my favourite symbols. One day I'll get one tattooed.

It's a great symbol isn't it