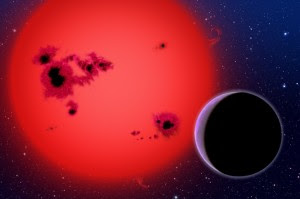 A student has discovered the first Earth-like planet ever seen outside of the solar system. The planet is about seven times the mass of our own planet and appears to be composed of about 50 per cent water, an essential condition for organic life to survive.

Called GJ1214b, the planet is in orbit around a red dwarf star that is about one-fifth the size of the Sun and is about 40 light years away. Although it is likely to be too hot to sustain life, the discovery shows that even very basic ground-based technologies are capable of finding almost-Earth-sized planets in warm, life-friendly orbits.

“Despite its hot temperature, this appears to be a waterworld,” said Zachory Berta, a graduate student at the Harvard-Smithsonian Centre for Astrophysics who first spotted the planet. “It is much smaller, cooler, and more Earth like than any other known exoplanet.”

The discovery, which was published today in the journal Nature, was made through a major search programme, called MEarth, aimed at discovering Earth-sized planets elsewhere in the galaxy. The project is monitoring 2,000 of the smallest stars in the sky for hints that they have orbiting planets.

The next step for astronomers is to try directly to detect and characterise the atmosphere, which will require a space-based instrument like Nasa’s Hubble Space Telescope. The planet is only 40 light-years from Earth, easily within the reach of current observatories.

“Since this planet is so close to Earth, Hubble should be able to detect the atmosphere and determine what it’s made of,” said Dr Charbonneau. “That will make it the first super-Earth with a confirmed atmosphere — even though that atmosphere probably won’t be hospitable to life as we know it.”

Given that the first exoplanets were only discovered on the 1990s we are now finding ones which are nore ameanable to life (well only a bit more). Whatm will we discover over the next decade or so? I can't wait to find out!
Posted by jams o donnell at 12:11 pm

Not to change the subject but I find the Hubble fascinating. For one orbit it uses the same energy as 28 100-watt light bulbs. Our NASA tax dollars at work!

Money far better spent than on many things!

I like hearing good news from outer space — via Corkadoragha this time!

Here's one for you, in case you didn't see it: the sun's reflection off a hydrocarbon lake on Titan.

Wow stan that is truly amazing!

It sounds like good news. When our over-polluted globe croaks from either global warming or global ice age, we better be ready to catch an eddy in the space-time continuum and hop over there.

Ah at least we will have another earth to fuck up then!