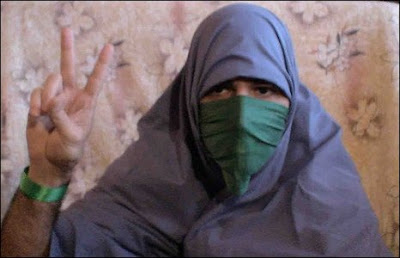 According to the BBC Iranian opposition supporters have launched an online campaign to free a student activist accused of dressing as a woman to try to avoid arrest.

Hundreds of men have posted photos of themselves wearing Islamic headscarves as part of the "Be a man" campaign to show solidarity with Majid Tavakoli who was arrested during protests in Tehran on Monday.

Iranian state media say Mr Tavakoli was arrested as he sought to leave Tehran's Amir Kabir university "disguised as a woman" after Student Day protests. He is a leading activist who spent 15 months in jail along with two fellow students after being arrested in 2006 on charges of insulting religion and the country's leadership in student publications

As a result there is an online protest in which scores of Iranian men are uploading photos of them in hijab Be a Man iranian.com, has posted scores of photos submitted by readers.

Some of the website's readers argue that the campaign is also a gesture of solidarity with Iranian women, who are obliged by the authorities to wear the hijab in public.

This is an excellent protest in my view. It may not achieve the desired result but it could be an excellent way to galvanise people for the next wave of protest. That is not to say I want the protest to fail by any means. I hope Mr Tavakoli is released immediately and without harm.
Posted by jams o donnell at 7:39 pm

That is a very fair way of protesting and I too salute this brave man.

I agree Susan, I salute them too