Neda Soltan is the Times Person of the Year 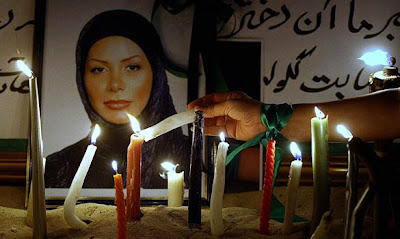 The Times has chosen a martyr of the Iranian protests as its person of the year. Six months ago Neda Soltan’s death flashed across the world and a tragic icon was born. This is an edited version of the Times article:

Neda was not political. She did not vote in the Iranian presidential election on June 12. The young student was appalled, however, by the way that the regime shamelessly rigged the result and reinstalled Mahmoud Ahmadinejad. Ignoring the pleas of her family, she went with her music teacher eight days later to join a huge opposition demonstration in Tehran. Hours after leaving home, she was shot, by a government militiaman, as she and other demonstrators chanted: “Death to the dictator.”

Arash Hejazi, a doctor standing near by, remembers her looking down in surprise as blood gushed from her chest. She collapsed. More blood spewed from her mouth. As she lay dying on the pavement, her life ebbing out of her, “I felt she was trying to ask a question. Why?” said Dr Hejazi, who tried to save her life. Why had an election that generated so much excitement ended with a government that claims to champion the highest moral values, the finest Islamic principles, butchering its own youth?

A 40-second telephone clip of Ms Soltan’s final moments flashed around the world. Overnight she became a global symbol of the regime’s brutality, and of the remarkable courage of Iran’s opposition in a region where other populations are all too easily suppressed by despotic governments.

She was no less of an icon inside Iran, whose Shia population is steeped in the mythology of martyrdom. Vigils were held. Her grave became something of a shrine, and the 40th day after her death — an important date in Shia mourning rituals — was marked by a big demonstration in Behesht-e Zahra cemetery in Tehran that riot police broke up.

It was not hard to see why Ms Soltan so quickly became the face of the opposition, the Iranian equivalent of the young man who confronted China’s tanks during the Tiananmen Square demonstrations 20 years earlier. She was young and pretty, innocent, brave and modern. The story of her death was so potent that the regime went to extraordinary lengths to suppress it. It banned a mourning ceremony, tore down black banners outside her home, and insisted that her funeral be private. It ordered her family to stay silent.

In the subsequent weeks any number of leading officials, ayatollahs included, sought to blame her death on British and American intelligence agencies, the opposition, and even the BBC — accusing its soon-to-beexpelled Tehran correspondent, Jon Leyne, of arranging her death so that he could get good pictures. The regime announced investigations that, to no one’s surprise, exonerated it and all its agents.

When The Queen’s College, Oxford, established a scholarship in Ms Soltan’s name the regime sent the university a furious letter of complaint.

Back in Tehran, the regime tried to buy off Ms Soltan’s parents by promising them a pension if they agreed that their daughter was a “martyr” killed by foreign agents. Her mother, Hajar Rostami Motlagh, was outraged. “Neda died for her country, not so that I could get a monthly income from the Martyr Foundation,” she said. “If these officials say Neda was a martyr, why do they keep wiping off the word ‘martyr’ in red which people write on her gravestone? ... Even if they give the world to me I will never accept the offer.”

Soon afterwards, government supporters desecrated her grave. The regime has not arrested or investigated Abbas Kargar Javid, who was caught by demonstrators seconds after he shot Ms Soltan. The crowd, unwilling to use violence, and with the police the enemy, let him go — but not before they had taken his identity card.

Six months on, it is obvious that Ms Soltan did not die in vain. The manner of her death, and the regime’s response, has shredded what little legitimacy it had left. She helped to inspire an opposition movement that is now led by her generation, which a systematic campaign of arrests, show trials, beatings, torture and security force violence has failed to crush, and whose courage and defiance has won the admiration of the world.

As the new year approaches, the so-called Green Movement appears to be gaining confidence and momentum. It no longer seems impossible that the regime could fall in 2010. If and when it does, Ms Soltan will be remembered as the pre-eminent martyr of the second Iranian revolution.

What to say but hope yet again that the Iranian regime is consigned to the worst circle of Hell where it and its Western apologists belong.

The Iranian protests have brought forward thousands of brave men and women and they are moist certainly not forgotten. However it is the case that one image can symbolise a whole event. Think of the Vietnam War and I would imagine that the picture of Phan Thi Kim Phuc running naked down a road is the image that springs to mind. Think of Tiananmen and it is the unknown protestor standing in front of a tank. Think of Iraq and I bet the image of Lynddie England dragging a prisoner on a chain in Abu Ghraib springs quickly to mind.

And so the murder of Neda Soltan is the defining image of the Iranian protests. The Times choice is appropriate in that it acknowledges just this.
Posted by jams o donnell at 12:01 am

I hadn't heard the martyr killed by foreign agents propaganda. They don't even consider this lying because, to them, we are infidels so they are justified.

This is a great travel blog you have here. I have one myself which I hope to be a top resource for those looking to travel. We have a lot to cover and not that much time to do it. I was wondering if we could exchange links to help spread some traffic around. Please let me know if this is possible.

Excellent choice and glad you are keeping up her memory.

True Pouty but the Iranian government is paranoid about foreigh ontervention. THe US is called the Great Satan but they will think that it is the British every time!

Your blood
Runs
On our small

You left
To visit
Another world

I am still sad about Neda.