The least of Stalin’s crimes go on exhibit 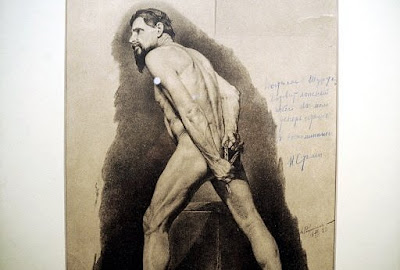 I would not have been surprised if, as a child, Stalin would have pulled the wings of butterflies so it is perhaps not a real surprise to discover that he enjoyed defacing classical nude drawings with macabre messages ridiculing political opponents that he had executed.

According to the Telegraph, examples of his defacement have gone on display for the first time in Russia. Although they depict people Stalin would not have known, some of the images seem to have reminded him of people he had killed or purged.

“Ginger bastard Radek, if he had not pissed against the wind, if he had not been angry, he would still be alive,” Stalin wrote across the leg on one of the naked male figures. This refers to Karl Radek, a man who helped draft the Soviet constitution only to fall out with Stalin and be jailed and murdered.

In another sketch of a bearded nude man, Stalin has drawn a red inverted triangle over the man’s penis. Experts say the accompanying comments are a barbed insult aimed at Mikhail Kalinin, a senior Bolshevik apparatchik who Stalin marginalised. “Why are you so thin?” mocks Stalin.

A sketch of a muscular young man clutching a stick is one of the few drawings to meet with Stalin’s approval. “This is the strongest comrade!” Stalin writes next to it. “This Soviet David is preparing to tackle global imperialism. We will help! ”

Stalin appears to have defaced the reproduction sketches towards the end of his life, scrawling on them in red and blue ink before signing off with a flourish: “J. Stalin.”

The sketches’ owner has not been made public but it is thought that the drawings have been kept secret for more than half a century by Stalin’s former bodyguards and were only recently sold to a private collector.

I suppose that these give us a fresh insight into the man – that he was one warped and twisted example of humankind... Bo surpise there then!
Posted by jams o donnell at 4:43 pm

He's regarded over there now as a nasty piece of work.

I hope it stays that way James

Very interesting topic you've brought to my attention. Thank you.

It certainly does eh?

Hard to believe that, in WW2, our countries had to ally themselves with this monster to get rid of another madman.

We certainly supped with the devil!

Yes we have indeed!!!! Stalin and Hitler would have made great friends if both weren't greedy, selfish bastards. General Patton was right when he called Stalin an "S.O.B."

and I always thought he was a light-hearted, cheery fellow..

Patton was bang on there Kay!

Haha Susan, there are those that believe that Uncle Joe's worst vices were a small sherry in the evening and comfy slippers!

If he were alive today, the US would have a sherry and comfy slippers summit with him.