Christmas – a time to jail dissidents 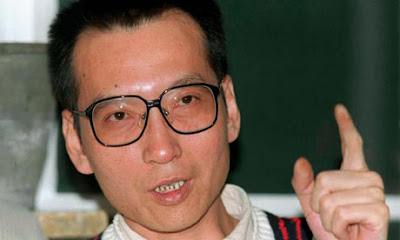 The Guardian reports that Liu Xiaobo, one of China’s most prominent human rights activists was sentenced to 11 years in prison. Liu is the founder of the Charter 08 campaign for constitutional reform and was given what is a draconian sentence yesterday on Christmas Day, clearly in an attempt to minimise international attention.

Following a year in detention and a two-hour trial, it took the No 1 intermediate people's court in Beijing just 10 minutes to read out the 11-page sentence. Liu was found guilty on Wednesday of subversion, the vaguely defined charge that Communist party leaders often use to imprison political opponents. litigation rights".

"We cannot accept this sentence because we have argued in court that Liu is innocent," said one of his lawyers, Mo Shaoping. His wife could not be reached as her mobile phone was strangely out of order. Amnesty International expressed outrage at the sentence, which it said was the harshest in 35 subversion cases since 2003.

Outside the courtroom and in the Chinese blogosphere, Liu's supporters have initiated a yellow ribbon campaign for his release. "China's Mandela was born this
Christmas," wrote the influential blogger Beichen.

Liu, a former Beijing Normal University professor, is a leading intellectual critic
of the repressive Chinese government. Liu was previously imprisoned for 20 months for taking part in the 1989 student-led protests in Tiananmen Square.

He told friends that he knew the risk of imprisonment when he drafted Charter 08, which demands the open election of public officials, freedom of religion and expression, and the abolition of subversion laws. Liu was arrested last December before the Charter was made public. Other drafters and signatories have been harassed. The mainstream media have been forbidden to cover the subject and censors have blocked many related internet sites and articles. Many Chinese are unaware that it exists.

Liu’s imprisonment is an utter disgrace The Chinese Government looks to have created an icon and focus for protest, perhaps even of the status of Aung San Suu Kyi or, as the Chinese blogger says, Nelson Mandela
Posted by jams o donnell at 12:08 am

The US can't touch that. China owns our debt, owns us, or both.

Sadly there is too mmuch truth in that Pouty Lips. When CHina says so the US will bend over and take another inch

Sorry, but the USA does far more than any other country in this area. We accept scores of political asylees. While the USA has done plenty what has the EU done.

Furthermore, there is a man sitting in jail longer than Mandela in Cuba.What have the folks in the EU done to free him. It would seem the folks in Europe have done more to harm the cause of freedom than help it. Were it not for the USA and some help from
Thatcher Eastern Europe would still
be colonized while clowns like Galloway pretend that this is the will of Eastern Europeans.

China will implode on its own.

Yep, when people's guards are down, in come they who never sleep, never rest.

I guess it's his fault he's in jail then for not defecting to the US where he would be safe. I guess I should have said, stupid dissident.

Beakerkin isn't the US hugely in hock to China? Will that not ultimately affect the USA's response to its acts.

As for this article we are taklking about China here, not Cuba. When I talk about Cuba, I will not refer to China.

James what better time to do something like this?

China doesn't worry about what we think. No matter what that bastard (sorry!) government does, we still do business deals with them. My Prime Minister visited, and pointed a disapproving finger, and then arranged for some trade!!! I don't know if it will help that Pen International (and all the Chapters in different countries) are collecting thousands, and thousands of signatures condemning the sentencing as "a grievous betrayal of a Chinese citizen's rights". All the letters will get thrown out probably. What else can we do?

Sadly so Claudia. I am not sure China will give a dman about international opinion. Still that is no reason for silence

Of course, we shouldn't be silent, Jams. I spend hours on the phone, for Pen Canada, to get people to sign petitions to China. What I'm trying to say is that we should do something better, something that works. And our governements shouldn't rebuke China one day, and do business with it the next day. No wonder our words are not taken seriously.

Very tru Claudia. For some a petitio will work - Some states for example are surprisingly sensitive about their internatonal image and they would react sometimes to a petition.

What works for China is a differnet matter, We can hardly apply sanctions given that we need China more than they need us

The USA does way more than the EU in this area. The Chinese dissident community is almost entirely based in the USA. We do not have politicians who mock the protesters like you in the UK. Any such politician would get ridiculed on FOX or on talk radio 24/7 ala Cynthia
McKinney.

My counterparts in China work very
hard to secure freedom for dissidents. They do this while the
EU does zero.

The USA has always supported human
rights around the globe while the
folks in the EU waxed in an amoral
fog about Marxism. There is a prisoner in Cuba who has served longer than Mandela and the EU crowd does nothing other than lecture the USA about boycotts. Cuba has sent foreign mercenaries around the globe and supported insurrection and pointless wars.

What has the EU done? It has done nothing.

When Iranian refugees look for a home they seldom go to Europe.

Speak for yourself. My peers in China
work very hard to free people like this dissident.

As the USA has extensive business
ties with China it does quietly
release dissidents albeit low key.