Attack of the Killer tomatoes.... 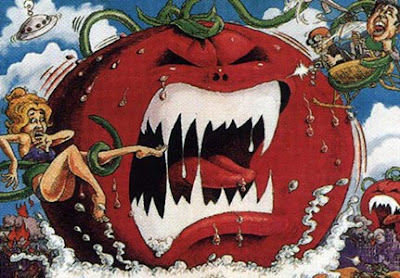 Back in 1978 John De Bello directed one of the most chilling horror movies of all time. Attack of the Killer Tomatoes presented a dystopian vision of an America overrun by sentient, evil, anthropophagous fruit. Little did he know that his film was in fact a terrible prophesy...

Jams is talking rot again, I hear you say but no, no and thrice NO! Researchers at the Royal Botanical Gardens, Kew believe there are hundreds more plants that catch and eat insects and other small animals than they previously realised. Among them are species of petunia, ornamental tobacco plants, potatoes and tomatoes.

“Widely recognised carnivorous plants number some 650 and we estimate that another 325 or so are probable additions – so an increase of about 50 per cent,” said Dr Mike Fay, of Kew.
Dr Fay said it is likely that the meat-eating qualities of many plants has gone unrecognised because they are missing some of the prime characteristics associated with carnivorous species. Pitcher plants and venus fly traps have specialist structures to kill and devour their prey but other plants are more subtle and rely on supplementing their usual diet by passive means.

Plants such as ornamental tobaccos and some species of potatoes and tomatoes have sticky hairs which trap aphids and other small invertebrates. It is thought that rather than devour the prey directly the dead bodies decay slowly and the nutrients fall to the ground where they are taken up by the roots.

“They catch little aphids on the sticky hairs all the time. As these insects break down and drop to the ground the ground becomes enriched and the plants absorb them through the roots,” he said.
Domestic varieties of tomatoes and potatoes retain the ability to trap and kill small insects with their sticky hairs but they are, thought to derive little benefit because they are so well-supplied with fertilisers whereas in the wild it might be an important source of food.

The researchers, publishing their finding in The Botanical Journal of the Linnean Society, added: “We are accustomed to think of plants as being immobile and harmless, and there is something deeply unnerving about the thought of carnivorous plants. Overall, angiosperms [flowering plants] of many types may be involved in a degree of carnivory and be ‘proto-carnivorous’; perhaps we should be more curious about why more plant species have not developed a ‘taste’ for animal-derived nutrients.”

Personally I think spuds and tomatoes have a plan. Have you noticed that spuds grow eyes if we leave them alone... all the better to see us. all the better butcher us in our beds, I tell ya!
Posted by jams o donnell at 9:28 pm

This post made me smile.... WELL..... maybe Monsanto has something to do with genetically engineering the tomato seed?

LMAO, Jams damn Attack of the killer tomatoes is Iconic but don't worry I won't let them butcher you! *wink*

THe biter would be bit if they did make them Nevin!

Amanda you are my hero!