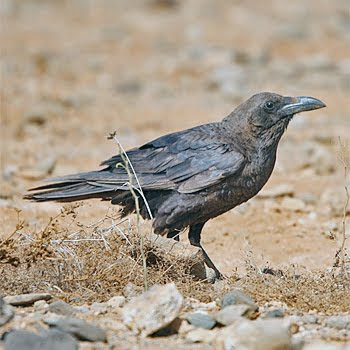 According to the BBC ornithologists in Israel have observed a birds working together to trap and kill their prey.

In each hunt, a number of individual ravens, or pairs of birds, could be seen. But the birds did not flock together. However, when they sighted a lizard, the teamwork began. The birds would wait until the lizard had moved away from its burrow entrance. Then two birds circling overhead would fly in at high speed, landing at the burrow entrance. This effectively cut off the lizard's escape. The remaining ravens then targeted the lizard, pecking at it until they had killed their prey, before tearing off pieces to eat.

Only when the lizard was evidently dead did the two ravens guarding the burrow entrance leave their post, and join in to feed. "This is a live hunting expedition with the roles spelt out in advance. It is almost like an infantry assault," says Prof Yosef.

The ravens succeeded in killing their prey on seven out of the nine hunts.

Professor Yosef and his daughter believe that the cooperative hunt suggests that brown-necked ravens posses what scientists call a 'theory of mind'.

Initially, each raven must recognise that the lizard, which averages 75cm long and can weigh up to 1kg, is too big to take on alone. The reptile also possesses a heavy spiked tail that can easily injure a bird. Then for each bird to take part in the hunt, and fulfil a particular role, they must have some understanding of what each other is thinking, and be able to realise that by cooperating, they will share in the reward.

Other birds, including falcons, shrikes and Harris hawks, are known to hunt in pairs, with one bird flushing out prey into the path of another. Such hunts are usually performed by breeding pairs or related birds. The ravens on the other hand do not appear to be related, and seem more tactically astute.

Brown-necked ravens are a little studied species which breeds across north and central Africa to southwest and central Asia. It has been able to expand its range in part due to its ability to exploit human settlements built in desert regions.

Again this is another of those "wow" moments, or at least it is for me
Posted by jams o donnell at 9:37 pm

My husband is a falconer. We currently don't have any birds, but he used to have both red tail hawks and Harris hawks, and we are very familiar with this behavior. How interesting to see it in ravens!!

It really is fascinating isn't it?

But then nothing surprises me about the crow family

Jams, thank you for your recent series of posts on corvids — a very underrated family! On my walks I meet crows, ravens, magpies and jackdaws quite regularly, and I always enjoy pausing a while to see what they do.

On a related note, if you ever come across Konrad Lorenz's book King Solomon's Ring, don't hesitate to pick it up. Lorenz (sort of) lived with various corvids for years and studied them intensely — their behaviour, communication, relationships, social rules, etc. Near the end of the book there is a long chapter dedicated to them, including lots of amusing sketches. Wonderful, fascinating creatures.

Glad you like it Stan. It's a long time since I read Lorenz. I must find my copy of King Solomon's Ring

開拓王 said...
This comment has been removed by a blog administrator.
5:16 am