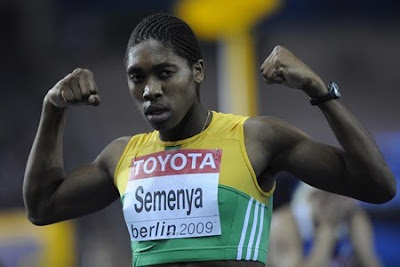 Again a holiday without newspapers etc meant that I missed developments in the Caster Semenya case, the young South African athlete who stormed to victory in the Women’s 800m at the Athletics World Championships in Berlin. Her rapid improvement this year (she smashed her personal best over 800m by seven seconds earlier in the year) prompted calls for a gender test.

According to a BBC report last week tests have revealed that Caster's testosterone level are three times higher than those normally expected in a female sample. Although high level of testosterone does necessarily mean that she has failed a drugs test, it probably increased speculation around her gender.

Semenya was welcomed by hundreds of well-wishers on her return to South Africa following her demolition of Defending champion Janeth Jepkosgei by an enormous 2.45 seconds.

Only hours before the race, it leaked out that the International Association of Athletics Federations (IAAF) had demanded Semenya take a gender test amid fears she should not be allowed to run as a woman. News of the test only became public knowledge because a fax was sent to the wrong person. It has also been revealed that following the findings of initial tests, the South Africans were asked by the IAAF to withdraw her from the team at the World Championships.

Her family and South African athletics chiefs have leapt to her defence, insisting she is 100% female. "Caster is a girl. I am not worried about that too much," said her uncle on her arrival back in South Africa. Caster is like my child. I know where she comes from. For myself, I know Caster is a girl." 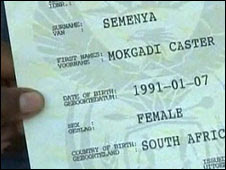 Leonard Chuene, president of Athletics South Africa (ASA), who resigned from his seat on the IAAF board in protest against the organisation's treatment of Semenya, said "It will not be fair for me to attack the IAAF as a council member and representative of South Africa. It is a conflict of interest. We have not once, as ASA, doubted her,"

Testosterone levels can vary widely, which makes it hard to detect possible infractions. When analysis shows an athlete to have a raised level, they are monitored at regular intervals over a set period to establish the underlying level. This is then used as a baseline for future testing. An analysis of Semenya's testosterone levels was carried out in South Africa and it is understood that this information contributed to the IAAF's decision to request the ASA carry out a detailed "gender verification" test on the athlete.

Caster Semenya most definitely looks androgynous but that does not necessarily mean that she is not a woman. I hope that any tests show her gender to be female and she continues to compete. She certainly is a remarkable athlete
Posted by jams o donnell at 6:02 pm

Semenya sounds like a man, has manish qualities but isn't it rather sad that because this woman does not fit the norm of barbie doll athletes then it is considered she must be really a man. If the testosterone levels are high naturally and not from ingestion of the hormones, I feel for all that she has to endure to excel at her chosen sport.

I agree Nunyaa. I do feel for her

Many of the female athletes look this way, and I think the whole issue is kind of silly.

And I have a constructive proposal: why don't they create an objective male committee of non-sport-related folks like me to check the girls out beforehand?

Ah that would be a committee of dirty old men then Snoopy? Sign me up!